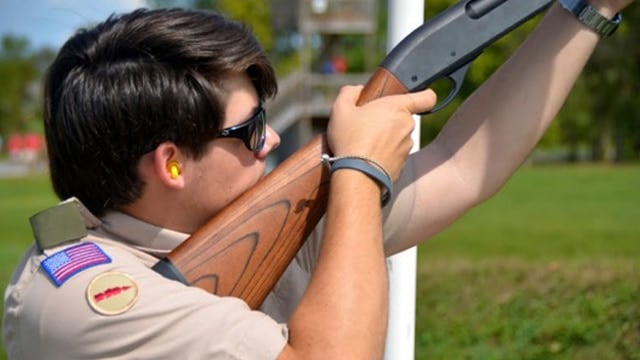 Texas Armament & Technology (TxAT), exclusive distributor of Aguila brand ammunition to the US and Canada, has announced a new sponsorship of the Boy Scouts of America Sam Houston Area Council’s sporting clays tournament.

The sponsorship entails being the only ammunition sponsor of the annual event. TxAT will provide 45,000 rounds of Mexican-made Aguila ammunition for the tournament.

This and other shooting tournaments around the nation are a major fundraiser for Boy Scout programs.

This is one story about moving goods across the border that’s not likely to appear on the front page of the New York Times. Nevertheless, it’s important to the Sam Houston Area Council of Texas. Past sporting clays tournaments have raised $250,000 for the council, whose membership is nearly 60,000 scouts strong.

The geographic reach of the council is large at 16 counties, and so is the tournament—sign-ups are cut off after the first 100 teams register.

Sam Houston Council’s gift from TxAT/Aguila comes on the occasion of the 20th anniversary of the tournament to be held on April 28 in Katy, Texas.

Says Kristi Drawe, Director of Marketing for TxAT/Aguila Ammunition. “These young scouts are our future leaders, our future hunters, shooters and educators. The money raised from these Boy Scout events supports all scouting programs, including Learning for Life school-based and exploring programs, and Scout-reach delivery to at-risk youth. What a perfect way to have a positive impact on our younger generation.”

TxAT/Aguila have been outspoken about supporting youth at the local level, and it appears they’re putting their money where their mouth is beyond the tournament. Brian McGuire, Senior Development Director for the Boy Scouts of America Sam Houston Area Council says, “TxAT and Aguila Ammunition will also be incorporated into other BSA events throughout the year. The support we are receiving from them is immeasurable.”

If there’s ever a solid wall built between the US and Mexico, let’s hope there’ll be a cut-out for Aguila to continue providing ammunition to this worthy cause.