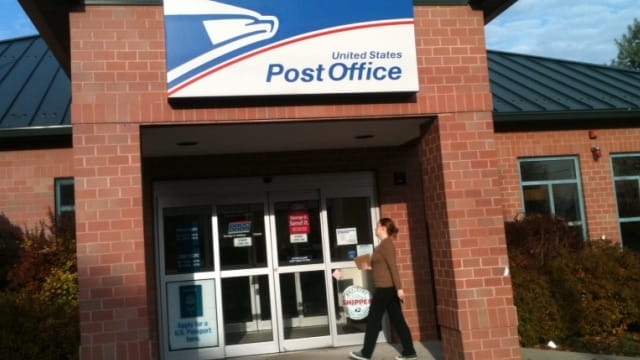 The U.S. Supreme Court elected to let stand a 2015 ruling that guns are not allowed in parking lots of spaces controlled by the Postal Service. (Photo: FOX31)

A Colorado case challenging the U.S. Postal Service’s ban on otherwise lawful concealed carry on their properties was rejected by the nation’s high court Monday.

The case, that of Tab Bonidy of Avon, has been making its way through the legal system for five years with the Postal Service arguing the federal jurisdiction over their often leased space and “sensitive place” mantra allows for a gun prohibition even if a patron has a local concealed carry permit.

Backed by the National Association for Gun Rights, in 2013 U.S. District Judge Richard Matsch delivered a two-part ruling, siding with both Bonidy and the USPS in turn by saying guns were banned inside buildings, but not in parking lots.

Last June, a 2-1 panel of the 10th U.S. Circuit Court of Appeals in Denver reversed Matsch in part, ruling that parking lots are included in the ban, with Circuit Judge David Ebel writing, “The security of the postal building itself is integrally related to the security of the parking lot adjacent to it,” for the majority.

Now the petition to hear further appeal in that ruling to the Supreme Court, filed last December and supported by an amicus brief from the Firearms Owners Against Crime and Firearms Industry Consulting Group earlier this year, was denied on Monday, effectively making last summer’s ruling by the 10th Circuit the law of the land.

The Supreme Court typically only accepts about 125 cases for review each year from about 5,000 requests.

Lawmakers in Congress have broached the subject of allowing firearms on USPS property in the bipartisan Postal Reform Act, or S. 1486, which was introduced in 2013 into the senate by Sen. Thomas Carper, D-Del. and cosponsored by Sen. Tom Coburn, R-Okla., however the bill never left committee. Sen. Rand Paul, backed by NAGR in his failed bid for the 2016 GOP Presidential nomination, has also tried to work post office carry into legislation without success.