Challenge to Colorado's 2013 gun laws back to square one 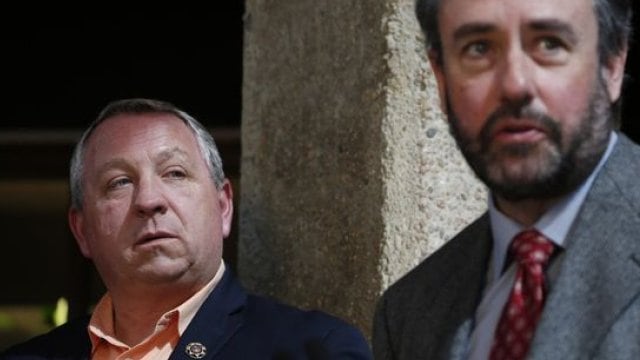 A federal appeals court on Tuesday refrained from ruling on the constitutionality of Colorado’s gun laws themselves, and vacated a lower court’s ruling that upheld them.

The suit, brought in federal court originally by 54 Colorado sheriffs, Magpul and a number of gun retailers, outfitters and trade groups, was led by noted Second Amendment expert David Kopel of the Independence Institute and has spent the past four years attempting to dismantle the state’s strict gun laws passed in the wake of mass shootings in Newtown and Aurora.

Framed as violations of the Second and Fourteenth Amendments as well as the Americans with Disabilities Act by the plaintiffs against Democratic Gov. John Hickenlooper, U.S. District Court Judge Marcia Krieger in 2014 found that the two new laws challenged – limiting magazine capacity and expanding background checks to include almost all firearm sales – were constitutional.

Now the case, Colorado Outfitters v. Hickenlooper, heard last fall by a three-judge panel of the 10th U.S. Circuit Court of Appeals, this week unanimously vacated Krieger’s decision, citing the plaintiffs lacked legal standing to have brought it in the first place.

“Because the plaintiffs failed to carry their burden of establishing … standing, the district court lacked jurisdiction to consider their claims,” wrote Circuit Judge Nancy Moritz for the panel which included Judges Jerome A. Holmes and Carolyn B. McHugh. Holmes is an appointment by President G.W. Bush while McHugh and Moritz are more recent appointments by President Obama.

The panel outlined their reasoning by shooting down claims that the sheriffs, outfitters, and trade groups could not show the new laws directly injured them. Moritz termed claims of possible future violations as being speculative.

When attorneys for the plaintiffs argued that Colorado Youth Outdoors had suspended its rifle loan program over fears of violating the background check law, thus showing injury, the court contended this wasn’t the case as the local district attorney was aware of and had declined to prosecute at least one known possible violation of the law since then.

Pushing away arguments that those in current possession of grandfathered large capacity magazines could eventually lose them as the devices wear out or, in the case of law enforcement personnel keeping magazines after retirement, Moritz held there was no credible threat of prosecution and that, “Such ‘some day’ speculations are insufficient to establish an injury.”

Kopel agreed in part with the panel that the laws have not seen prosecution thus far.

“The laws are unenforceable, and they haven’t been enforced,” said Kopel, who explained the court’s latest ruling provided a road map for bringing a new suit. Importantly, this week’s decision shoots down the only legal precedent, Kreiger’s 2014 ruling, that upheld the law.

“There is not a word in the 10th Circuit of any, now valid, legal opinion that is against us on the merits. The Judge Krieger decision is no more,” said Kopel.

“We’ve always felt that we have a very strong case on the merits, and the sheriffs intend to continue and get a decision on the merits, which we believe, if a court follows the Supreme Court, will lead to a victory for the plaintiffs and the erasure of these unconstitutional and unenforceable laws.”

Gov. Hickenlooper’s office has not released a statement on the case.