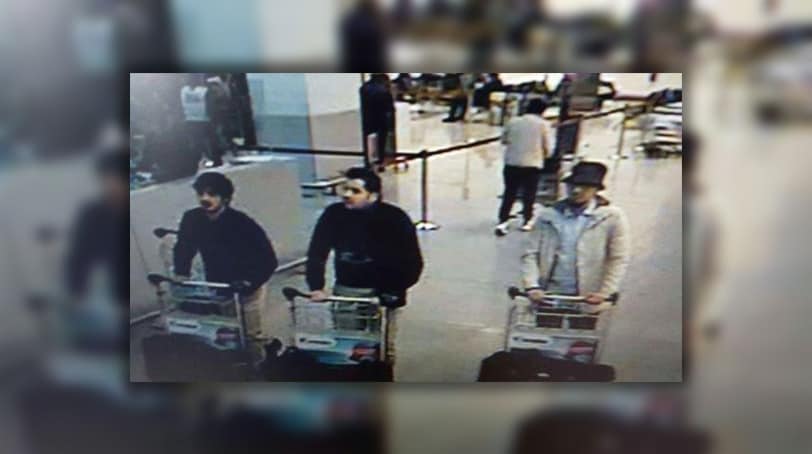 Belgian authorities on Wednesday said that one of the three attackers responsible for three deadly blasts that killed more than 30 people and injured over 100 others in the country’s capital of Brussels on Tuesday left behind a bag of undetonated explosives and is still at large.

Belgian investigators say the other two suspects were brothers Khalid and Brahim El Bakraoui and are believed to have killed themselves in the bombings, Belgian media reported.

Bomb experts performed a controlled explosion of the bag, which was said to have contained the “the heaviest load of explosives,” the Los Angeles Times reported from Brussels.

In the aftermath of the attacks, people scattered as debris littered the busy international hub. Two of the blasts hit the airport in the Belgian capital and another detonation occurred at its metro station, leaving passengers trapped in a dust and soot-filled, subterranean tunnel. The chaos was chronicled in raw and dramatic video taken on the scene and posted by the Associated Press.

The attacks prompted officials to place the city on the highest alert level and people were cautioned against coming out into public places, NPR reported. 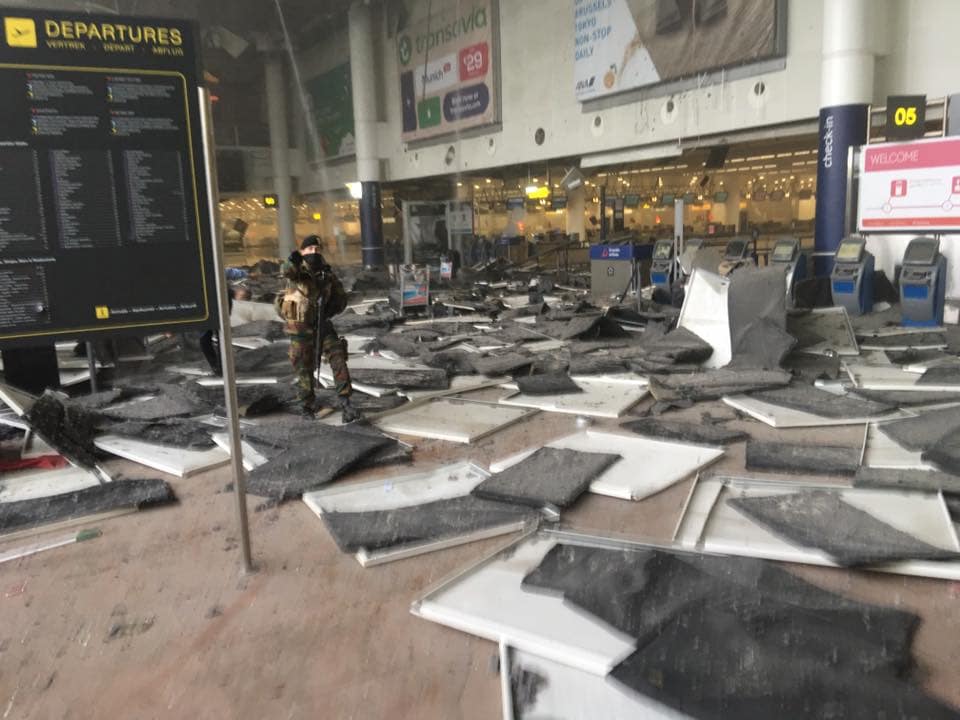 Debris can be seen scattered about after an explosion in Brussels International Airport Tuesday morning. (Photo: Jef Versele / Facebook)

Police carried out raids in neighborhoods across Brussels in search of the last surviving suspect of the three responsible for the attacks.

During the neighborhood search, investigators found an explosive device made of nails, chemicals and an Islamic State flag. The terrorist group has reportedly claimed responsibility for the Brussels bombings, as well as the November Paris attacks.

A Los Angeles Times correspondent in Brussels translated the terrorist group’s statement on its latest attack:

By the grace of Allah and his will alone, a security group from the soldiers of the Caliphate, may Allah dignify it and support it, mobilized in targeting Crusader Belgium, which did not stop targeting Islam and its people, so Allah conquered through the hands of our brothers and cast in the hearts of the Crusaders fear and terror in the very heart of their land.

A group of the soldiers of the Caliphate, wrapped in explosive belts and carrying explosive canisters and machine guns, set out to target sites carefully chosen in Brussels the capital of Belgium, to go inside Brussels airport and the metro station and kill a number of Crusaders, before detonating their explosive belts in their midst, and the result of the attacks was the death of more than 40 and the wounding of no less than 210 of the citizens of the Crusader nations, and to Allah thanks and appreciation.

According to media reports, Khalid El Bakraoui used a fake name to rent an apartment where a suspected terrorist was killed by police in a raid last week, linking the latest volley of attacks to those in Paris four months ago. Some analysts believe the Brussels attack was payback for the recent arrest of Salah Abdeslam, who authorities say is the last surviving terrorist responsible for three coordinated attacks on Paris. Others claim the Brussels bombings couldn’t have been retribution because the time to prepare for such attacks is greater than the few days that have elapsed since Abdeslam’s arrest.

Abdeslam allegedly helped to plan the attacks that ended in the deaths of 130 people and the wounding of 368 more in the French capital. Abdeslam ditched his suicide vest in a dumpster before fleeing to nearby Brussels, where he was arrested Friday.

President Obama ordered that U.S. flags be flown at half staff in solidarity and delivered remarks during his historic visit to Cuba.

“The American people stand with the people of Brussels,” Obama said. “We will do whatever it takes, working with nations and peoples around the world, to bring the perpetrators of these attacks to justice, and to go after terrorists who threaten our people.” 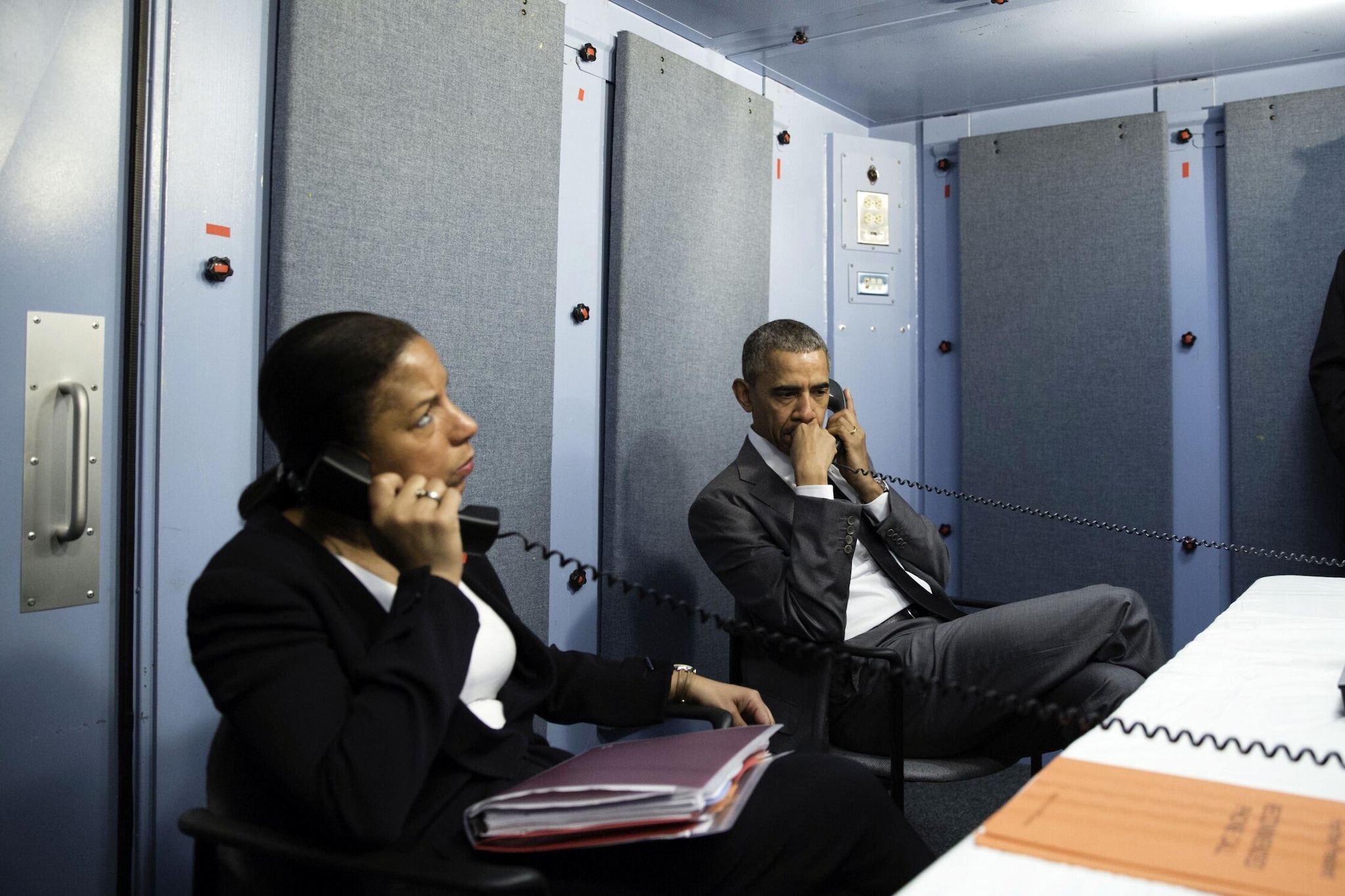 President Barack Obama and National Security Advisor Susan E. Rice talk on the phone with Homeland Security Advisor Lisa Monaco to receive an update on a terrorist attack in Brussels, Belgium. The President made the call from the residence of the U.S. Chief of Mission in Havana, Cuba, March 22, 2016. (Official White House Photo by Pete Souza)

Secretary of State John Kerry said in a statement that the U.S. was working “to determine the status of all American citizens in Brussels” and the embassy there issued a statement telling Americans to stay where they are and “take the appropriate steps to bolster your personal security,” ABC News reported.

“What we feared has happened, we were hit by blind attacks,” Prime Minister Charles Michel said.

French President Francois Hollande reportedly said, “terrorists struck Brussels, but it was Europe that was targeted — and all the world that is concerned.”

The explosions were the result of a suicide attacker, who struck sometime close to 8 a.m. Brussels time after unleashing a volley of gunfire before reportedly yelling something in Arabic.

Republican presidential candidate Donald Trump weighed in on the attack, saying he knew it was coming and that the U.S. should close its borders.

“I’ve been talking about this for a long time, and look at Brussels,” Trump said in a phone interview with “Fox & Friends” on Tuesday. “Brussels was a beautiful city, a beautiful place with zero crime, and now it’s a disaster city. It’s a total disaster.”

“We have to be very, very vigilant as to who we allowed into this country.” –@realDonaldTrumphttps://t.co/yvcrcQNNgS

We must strengthen our alliances to root out evil. Not dismantle them. #Brussels pic.twitter.com/fscW7zzD64

At least one U.S. city launched counter-terrorism resources in response to the European bombing. The New York City Police Department released a statement saying it was monitoring the situation and preparing for the worst.