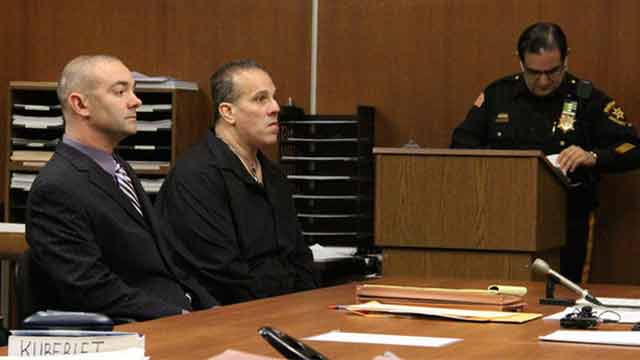 Acting is a part-time gig for Carlo Goias, middle, who primarily does stand-up comedy. (Photo: Go Fund Me)

An actor from Toms River, New Jersey, may spend up to 10 years in a state prison after he used a pellet gun as a prop while filming a movie last year.

Carlo Goias, who is also known by his stage name, Carlo Bellario, rejected a plea deal in court Tuesday. While the plea bargain would have left him serving less than a year, Goias wants to see his case go to trial.

Goias was part of a crew involved in filming an independent movie on Nov. 16, 2015. Goias played the part of a drug-dealing gangster’s bodyguard and on the day in question filmed a scene that included him utilizing the pellet gun in a pretend drive-by shooting. No shots were actually fired, because, as Goias noted, the sound of gunfire would later be dubbed into the film.

Nonetheless, some residents in the neighborhood where the scene was being filmed, became concerned over what they saw and several placed calls to 911. Goias said within minutes after filming the scene, they were surrounded by police cars.

Goais, who was not legally possessing the pellet gun at the time because he did not have a valid state permit for it, spent the next four days in jail, until friends and family raised enough money to post his $10,000 bail. Goais now has a Go Fund Me account to help pay his legal fees. The account has generated nearly half of the $15,000 goal.

Goias, as well as his lawyer, argue that his intent was never to commit a crime.

“I was shooting a movie – I wasn’t committing a crime intentionally,” Goias told The Associated Press. “Robert De Niro doesn’t ask Marty Scorsese if he has gun permits. We’re actors. That’s for the production company to worry about.”

However, it does appear to be Goias’ worry since, due to the pellet gun charges coupled with previous felony convictions that include theft and burglary, he may spend the next decade in prison.

“Our fight is really with New Jersey’s gun law and the fact that we have person after person getting arrested and worrying about going to prison,” said Jef Henninger, Goias’ attorney. “There has to be a safety valve that prosecutors have, so these cases can be quickly dealt with.”

The film, “Vendetta Games,” which according to IMDb is on a $50,000 budget and was due to be released this year, remains unfinished.