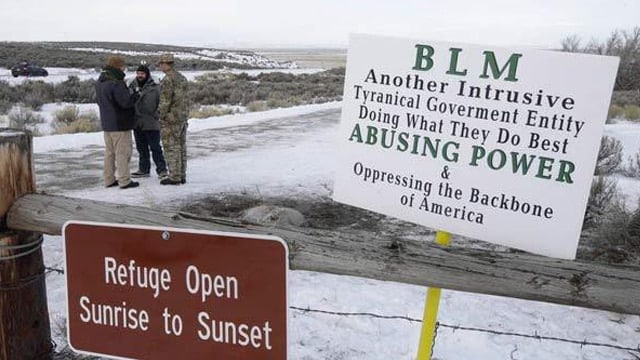 A sign protesting the Bureau of Land Management posted outside the federal refuge in Oregon. (Photo: AP)

A Utah congressman wants to eliminate the law enforcement functions of the Bureau of Land Management and the U.S. Forest Service — agencies at the center of recent high profile standoffs with anti-government groups.

The 10-page bill, titled “Local Enforcement for Local Lands Act of 2016,” would allow state and local law enforcement agencies to take charge during incidents on federal land rather than the federal agencies tasked with overseeing the area.

Rep. Jason Chaffetz, joined by three other Utah Republican representatives, introduced the bill on March 16, which had been referred to the House Agriculture committee. The group issued a statement explaining the reasoning behind the legislation.

“Federal agencies do not enjoy the same level of trust and respect as local law enforcement that are deeply rooted in local communities,” they said, adding that the measure “will help deescalate conflicts between law enforcement and local residents while improving transparency and accountability.”

Chaffetz’s office released the statement alongside a letter of support by the Utah Sheriffs Association. The organization said it has a “strong heritage in keeping the authority of the Sheriff a top priority.”

“The Utah Sheriffs Association has seen federal officials try and usurp this authority by enacting laws and regulations that mirror state law,” the group said.

The measure comes about a month after the end of a standoff involving armed ranchers occupying the Malheur National Wildlife Refuge in Oregon. Many of the occupiers resisted federal involvement and instead tried to negotiate with area authorities. Also, many involved had ties to a 2014 incident with Nevada rancher Cliven Bundy who led an armed standoff with BLM agents tasked with removing his cattle from federal land — a movement Chaffetz had expressed sympathetic comments toward.

Other lawmakers have expressed criticism on the measure, saying it emboldens group’s like the armed ranchers or militiamen.

“[I]t’s mind-boggling that my Republican colleagues would try to assist those who break these laws – some of whom are also involved in drug trafficking, human trafficking and even terrorism – instead of working to conserve our natural resources for everyday Americans,” said Rep. Raúl Grijalva (D-AZ), the ranking Democrat on the House Committee on Natural Resources, in a statement to Talking Points Memo.

“Validating Cliven Bundy and his sons is not the way to improve land management and reduce conflict on U.S. public lands, but that is exactly what this Republican-led bill would do,” he said.