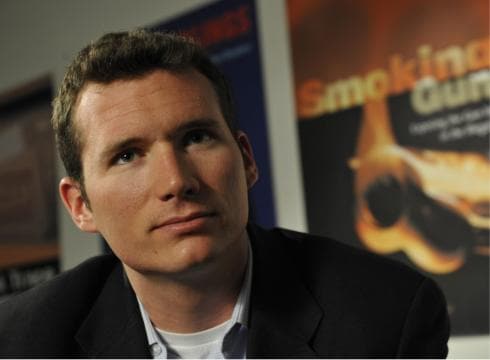 One of the shooting victims of the 2007 Virginia Tech massacre was in Maine on Wednesday promoting a documentary on his experience during the incident and sharing his story in a call for tighter gun control laws.

Colin Goddard, now a member of gun control group Everytown for Gun Safety, was attending the technical college when another student went on a rampage, killing 32 people and injuring 17 others, including Goddard, who was shot four times.

The film, “Living for 32,” documents Goddard’s story of survival during the deadly shooting.

“We will all go through horrible experiences in our lives and in those moments, you ask yourself, ‘How did this happen? Why did this happen?’” Goddard told local media. “What I learned about the shooting at Virginia Tech is that we don’t do criminal background check on every gun sale in America. I thought that was alarming. I had to share my story, put a face to the problem and talk about the things that we can do to make this less likely to happen,” said Goddard.

Effective in October, it became legal in Maine for residents to be able to carry a concealed handgun without a permit.

“It’s unfortunate to see Maine move in the direction of getting rid of the permit system. We know that it makes people less safe. But at the same time, we do see an appetite to make progress and actually do something good,” Goddard said. “So the background checks ballot initiative here is a way to show that, despite what’s happened recently, people in Maine still want something to be done and still want to reduce gun violence.”

The group’s message of gun safety through universal background checks galvanized supporters, who submitted close to 85,000 signatures — almost 25,000 more than the required amount — to bring the initiative to vote.

The National Rifle Association opposes the proposal, but declined to comment by story publication. In an October bulletin, the gun rights group claimed the initiative won’t work.

Like all of Bloomberg’s proposals, this effort will do nothing to deter criminals or stop crimes. It will only serve to make it more difficult for law-abiding citizens to obtain guns for protection. But it won’t move forward without a fight.

“Universal background checks are nothing more than a fancy way to get gun registration in the state of Maine,” says Shane Belanger of Gun Owners of Maine. “Bloomberg already failed to block Constitutional Carry, and now we’re going to send him home with another failure and a whole lot less money.”

The Virginia Tech massacre remains the most deadly carried out by a single shooter in the U.S. and is among the most deadly worldwide, beat out by the likes of Australia’s 1996 Port Arthur massacre and a few others.

In the 14 years preceding 2000, the U.S. led the world in the most mass shootings – 133 – in which “targeted violence (was) carried out by one or more shooters at one or more public or populated locations,” according to one piece of research on the subject.

There is much debate over what constitutes a mass shooting and there are several factors to consider when counting the number of such incidents – the number of victims; number of victims who actually died, versus being wounded; a shooting in the commission of another crime, versus the shooting being the intent of the crime.

Despite the lack of consensus on mass shootings, people die and those that survive are scarred as a result. At the heart of it all lies the question of whether stricter gun laws can prevent future mass shootings.

The debate is a contentious one and battle lines have been drawn.