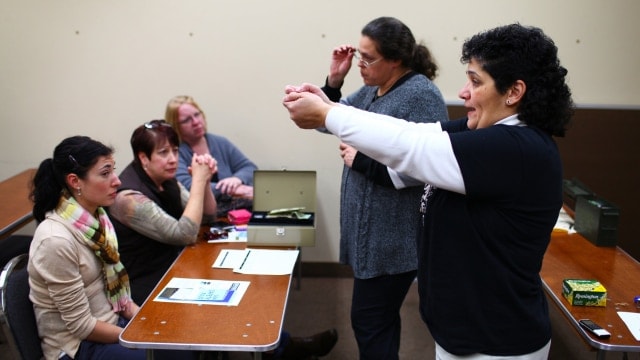 The Trace argues, based on survey data, that female gun ownership numbers have been stagnant for decades. Others disagree. (Photo: Storify.com)

An article this week by The Trace, claiming the rate of female gun ownership has remained relatively unchanged for decades, drew criticism from a firearms industry trade group.

The piece posted Wednesday, entitled “The Myth of the Rise in Female Gun Ownership,” goes on the offensive against articles published in recent months by CBS News, the Chicago Tribune, the New York Times and CNN which held the numbers of women with firearms are on the rise. The Trace piece argued that data drawn by such articles for background came from anecdotal evidence and “does not reflect reality.”

Putting a pin in the balloon of rising female gun ownership, the Trace, a journalism start up funded by Michael Bloomberg’s Everytown for Gun Safety, consulted the General Social Survey. A project of the University of Chicago’s National Opinion Research Center, the GSS has conducted a sociological survey since 1972 to collect historical data on everything from government spending to race relations.

When it comes to gun ownership by women, the pollsters noted the number has averaged about 11 percent over the past three decades with slight dips, to as low as 9.1 percent in 1989, and slight increases, to as high as 13.7 percent in 1982.

“There’s been no meaningful directional change in the percent of women owning guns,” said Tom Smith, the director of the GSS.

However, the National Shooting Sports Foundation on Thursday posted a rebuttal to the article, citing the GSS itself was flawed when it came to gun data– much as they did last year when the survey noted a decline in gun ownership numbers despite eight straight years of increasing firearms sales that set all-time records.

The NSSF contends GSS isn’t actually counting the number of firearms in each household. Rather it is enumerating the number of individuals willing to talk to a stranger at their front door about how many firearms they own. The two concepts, holds the trade group, are vastly different.

“It is a staple of gun control politics to work to diminish both the size and the ever increasing diversity of the firearm-owning American citizenry,” noted Larry Keane, NSSF senior vice president and general counsel. “The Trace provides just the latest example.”

Besides noting the trade group’s own studies in female gun ownership rates, the NSSF also bemoaned the outlet for discounting previous articles in the mainstream media.

“The Trace also asks its readers to discount CBS News, Fox News, Ad Age and dozens of local reporters nationwide (collectively, a ‘credulous press’) who have actually gone to firearms retailers and ranges to report that they see evidence of more and more women buying guns and taking up target shooting as a recreational activity,” wrote Keane.