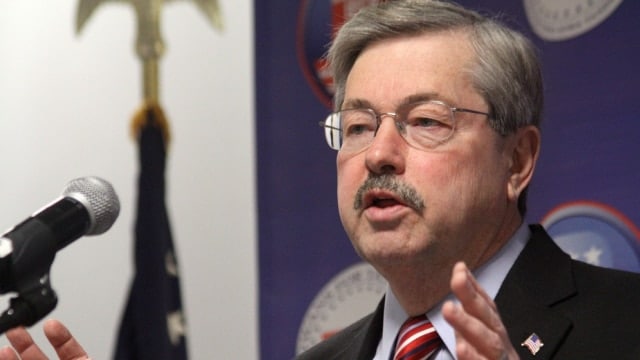 “I think the suppressor legislation will not only save people from hearing loss, but also could create some jobs in Iowa,” said Iowa Gov. Terry Branstad. (Photo: Gage Skidmore/The Iowa Republican)

With a bill speeding its way from the state legislature to legalize suppressors, Iowa Gov. Terry Branstad (R) let it be known he is in favor of approving the measure.

Withdrawn, the measure became HF 2279 which Rep. Terry Baxter, R-Garner, managed on the floor to an easy 74-24 win last month. The Senate approved the bill in a bipartisan 46-4 landslide last week, and the House concurred with a minor Senate amendment on Tuesday, sending the bill to Branstad who appears to be ready to receive.

“I think the suppressor legislation will not only save people from hearing loss, but also could create some jobs in Iowa,” Branstad said as reported by the Waterloo‑Cedar Falls Courier. “There’s a company we recruited from Minnesota that’s in Sibley, Iowa, that has indicated to me they will probably expand with this legislation.”

Gun rights advocates in the state, who worked closely with the National Rifle Association and trade groups such as the American Suppressor Association, said the three-year push to get a bill to the governor came from hard grass roots efforts.

“Without the support of our membership, we couldn’t have achieved this success,” Iowa Firearms Coalition President Barry Snell told Guns.com in an email. “It was their unrelenting efforts in contacting their legislators and participating in government that ultimately got us to this day. I look forward to seeing Iowans everywhere utilizing suppressors in the near future.”

Should Branstad, a Republican and an avid hunter, sign the measure, Iowa would immediately become the 42nd state to allow for the civilian ownership of suppressors. As the law stands today, possession of a suppressor is a Class D felony, which is punishable by as much as $7,500 in fines and up to five years in prison.

Other suppressor reforms are afoot elsewhere.

In nearby Indiana, Gov. Mike Pence this week signed off on a popular House bill that requires a chief law enforcement officer to sign off on paperwork for National Firearms Act items such as suppressors and machine guns within 15 days as long as the applicant is not prohibited by law from receiving them. Meanwhile, in New Hampshire, the state senate last week unanimously approved a House bill to allow for suppressor use in hunting.