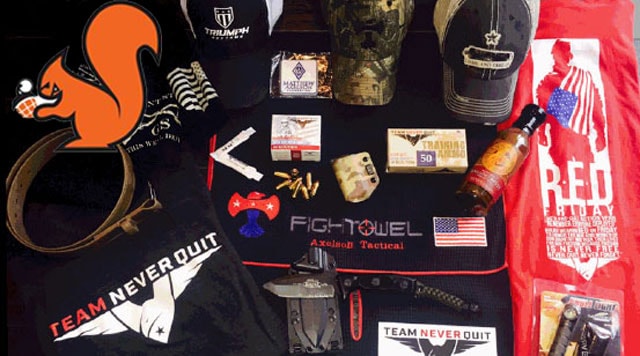 There’s a new box subscription service in town called Tactical Squirrel — right on the heels of the recent release of Sportsman’s Box, a subscription for hunters and fishermen.

Tactical Squirrel, LLC has different roots, though. The service is largely sourced by companies that support and employ American military veterans.

The service delivers four to six items of tactical wear, gear, tools, and toys on a monthly basis. Subscribers are asked to enter their gender and shirt size and — get this — favorite firearm calibers in order of preference. Most popular handgun and rifle calibers are included, along with 12 gauge for shotgun.

The company told Guns.com via email that “Tactical Squirrel is the only box service that includes ammo.” However, there’s no promise that ammunition will be included every month. Before readers get too excited: .22 of any variety isn’t in the mix of choices, but 10mm is though.

Two levels of membership are offered. Basic is $49.95 per month, plus $6.95 shipping/handling. Premiums $99.95 per month, including S&H. Federal Law Enforcement Officers Association members get a $5 per month discount from either subscription with a member ID.

The Idaho-based startup has 19 tactical partners as product sources. All are veteran-owned and/or operated. All either have their own veteran support programs or support veteran-run support programs.

Tactical Squirrel’s Facebook page has drawn comments from potential customers, apparently confused about pricing. Catch is, a person has to give their name and contact information before subscription options are shown.

This new box service looks to be a good choice for folks who love tactical gear and are interested in supporting veteran-owned businesses and veteran-run charitable programs.