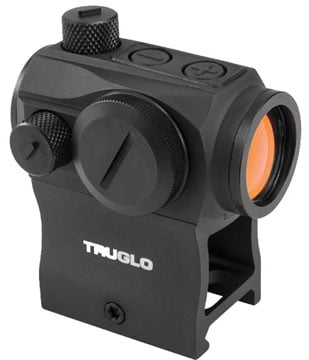 The TRU-TEC sight has all the features tactical shooters have come to expect in a red dot optic. It has a 2 MOA reticle, 10 brightness settings, and is shockproof. It has programmable auto-off for when the mind wanders to things other than that red dot. The 3V-CR2032 battery is included, which TruGlo promises is a long-lived power source.

And then it gets different. The TRU-TEC comes with its own mounts. Yes, plural, mounts. Low and high, fitting Weaver and Picatinny rails. No more buying one mount, only to change gear and your mind a few months later, and having to buy another. And co-witness? We reached out to TruGlo to ask if the high mounts will work with irons as backup. The answer: “Yes. A lower 1/3 co-witness, great for flip-up or standard BUIS.”

The included mount system isn’t all that’s different. The TRU-TEC has tap on/tap off convenience for the user. Just like The Clapper advertised for senior citizens’ light bulbs, now tactical types only have to give this optic a tap to turn it off or on.

The Tru Glo TRU-TEC 20mm red dot optic probably won’t be in the “As Seen on TV” section of your local department store anytime soon, but many will probably seek it out from a dealer for all its tactical conveniences. TruGlo isn’t offering up a price on its website, but as of this writing, the optic is listed at $179.99 at Sportsman’s Warehouse.