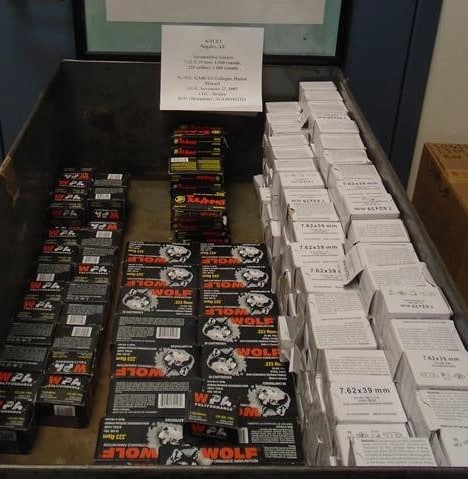 The seized ammunition at the border. (Photo: CBP)

More than 5,000 rounds of ammunition were seized from a truck headed for Mexico, said the U.S. Customs and Border Protection on Thursday.

CPB officers seized the assortment of ammo at the Port of Nogales, located 70 miles south of Tucson, on March 22, the agency said in a statement.

The ammo was found after officers performed routine inspections of a vehicle, a GMC sport utility vehicle, driven by an 18-year-old Mexican male. Upon a closer inspection, they found 5,560 rounds of ammo hidden throughout the vehicle.

Then the ammo, driver and vehicle were all turned over to U.S. Homeland Security Investigations.

“This interception is a direct result of the hard work and continued vigilance of our CBP officers,” said Guadalupe Ramirez, director of Nogales Port, about the interception.

“Keeping ammunition out of the hands of drug traffickers disrupts their operations and reduces violence along the border,” he said.