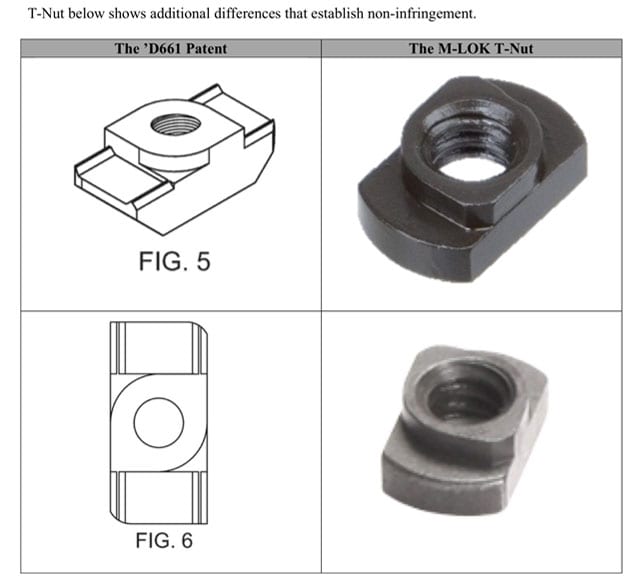 The Gibbz T-nut, left, compared to the Magpul M-LOK in the complaint. (Photo: Magpul)

An infringement claim had been presented to Magpul Industries by the company its currently suing, but it was an attempt to pressure the popular accessory maker’s licensees into a business agreement, according to an amended complaint filed this month in federal court.

Gibbz Arms, the defendant in the suit, sent a letter to Magpul’s founder, Michael Fitzpatrick, in August 2015 accusing the Texas company of using Gibbz’s intellectual property in designing the “M-LOK” system, a locking mechanism for firearm attachments, the lawsuit says.

Gibbz had a patent pending for the device when it sent the letter in August — and had the patent approved a month later — but the company did not file civil charges, according to search of the federal court system.

However, earlier in the year, at the end of February 2015, Gibbz issued a press release promoting licensing opportunities for its “GAMA” locking system and it also “implied that Magpul and its M-LOK Licensees would need to enter into a ‘Gibbz Arms License Agreement’ to continue using the M-LOK system,” the lawsuit says.

Although Gibbz’s release did not identify Magpul and its M-LOK licensees by name, “the fact that they were being accused of infringement was readily apparent to Magpul and others within the firearms accessory industry,” the lawsuit says.

On March 1, 2015, Gibbz began sending letters to Magpul licensees discussing an opportunity to enter into a licensing agreement.

“The letters include a threat to enforce Gibbz Arms’ patent rights against M-LOK Licensees upon issuance of Gibbz Arms patents unless negotiations for a license had already begun. And the letters specifically identified Magpul’s M-LOK system by name,” the lawsuit says.

In addition to the narrative, the amended complaint lists a fourth claim for relief for the accusations — a judgment of non-infringement of Gibbz’s patent. The other claims allege Gibbz, a company based in Mesa, Arizona, unlawfully implemented Magpul’s designs for products such as accessory rails and handguards for AR-15 rifles.

According to a search of the U.S. Patents & Trademark Office, the specific patents listed in the complaint cover a type of “firearm accessory mounting interface.”

The lawsuit also says Gibbz continued to produce at least one item knowing it infringed on Magpul’s design because the Austin-based company sent a notice in October 2015.

Magpul has asked the court to be awarded damages and to order Gibbz to destroy inventory that infringes on Magpul’s patents.

Eve Flanigan contributed to the reporting of this article