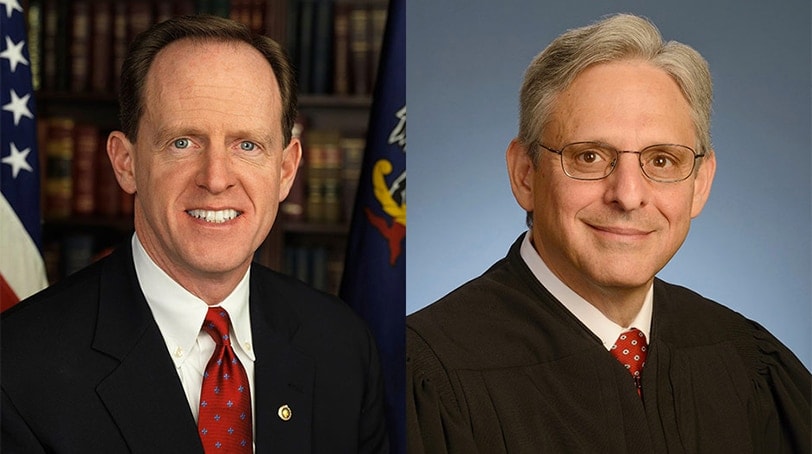 The battle over President Obama’s Supreme Court nomination continued this week with Sen. Pat Toomey reportedly agreeing to meet with Judge Merrick Garland, though it’s unclear when the sit-down will take place.

Though it seems the Republican senator from Pennsylvania may be breaking ranks on his party’s stance to stonewall the nomination, Toomey said he still supports not filling the highest court’s vacancy until a new president comes into office.

Vice President Joe Biden – whose 1991 comments while on the Senate Judiciary Committee were recently used by GOP leadership to stall Obama’s SCOTUS nomination – on Thursday called the block a “Constitutional crisis in the making born out of dysfunction in Washington.”

Biden made the remark during a speech at Georgetown University Law Center, just blocks from the Senate, Politico reported.

Toomey’s announcement, made Wednesday, came a day after the other Pennsylvania senator, Bob Casey, met with Garland, chief judge of the U.S. Court of Appeals for the District of Columbia Circuit, the New York Times reported. Toomey will reportedly be the ninth GOP senator to agree to a meeting with the nominee and six of them – including Toomey – are facing re-election. Senate Majority Leader Mitch McConnell was among those Republicans who said he would not meet with Garland, though the two reportedly spoke on the phone last week.

Garland’s nomination comes after a gaping hole in was created in the Supreme Court with the death of Justice Antonin Scalia, a constitutional purist who championed cases on behalf of the Second Amendment. Scalia’s death left the court in an even split on pending major constitutional cases. The next SCOTUS justice could tip the scales on big civil rights issues like the right to keep and bear arms versus balancing the need for public safety.

While Toomey said he will not go against the GOP and request a hearing or a vote on Garland’s nomination, he did say he would “carefully consider” the chief judge’s nomination should the next president choose him again.

Toomey is facing a difficult re-election in a Democratic-leaning state that could slip into the blue along with several others depending on how the presidential elections play out. The Pennsylvania senator is likely playing at the middle ahead of the Republican party’s pick for a general election bid.

Toomey is perhaps most famous in the gun rights community for a controversial background check bill he co-sponsored with Democratic Sen. Joe Manchin which was defeated in recent years. Gun rights advocates feared the bill would create a national registry the government could use to track gun buyers, though that claim has been disputed by fact-checkers who noted the bill language contained a provision expressly prohibiting a registry.