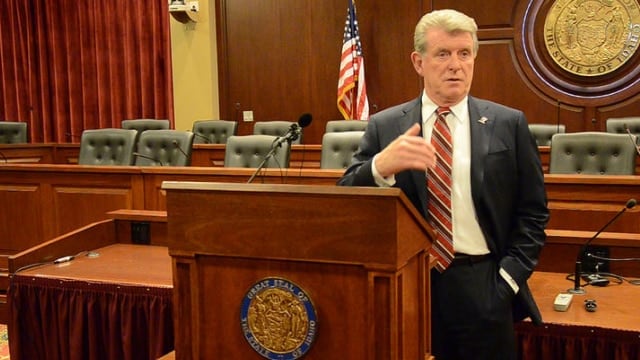 Gov. Otter approved a popular permitless carry proposal, but did stress that training is important for those who opt to do so. (Photo: gov.idaho.gov)

Republican Gov. Butch Otter gave his signature to a measure that will allow unlicensed concealed carry across the state for those 21 or older and legally able to possess a firearm.

The move to permitless carry has seen significant support in the state, passing the Senate 27-8 vote just a week after introduction and the House 54-15 last week. From introduction to Otter’s signature, the new law’s legislative process took but 18 days.

While gun control groups opposed the measure and called for veto, Otter gave it his approval Friday, but did urge those planning to carry obtain training — offering state lawmakers should have included such a requirement in the bill.

“While S.1389 is consistent with the U.S. Constitution, Idaho values and our commitment to upholding our constitutional protections from government overreach, I am concerned about its lack of any provision for education and training of individuals who choose to exercise the right to concealed carry,” wrote Otter in a message to legislators.

“Such a safeguard would seem to be part of the Second Amendment’s ‘well-regulated’ standard. What’s more, the addition of a simple training requirement in this bill could have addressed the concerns of our valued law enforcement leaders and others who cherish both the shooting culture and the safety of shooters and non-shooters alike,” he said.

Idaho has for years allowed permitless concealed carry outside of city limits for those involved in hunting, fishing or outdoor activities and in 2015 dropped the sporting requirement as a prerequisite – however, carry inside cities still requires a permit.

Under the new law, concealed carry mandates would largely homogenize across the state, allowing those over 21 who are legally able to possess a firearm to carry a concealed handgun statewide without first obtaining a permit, while those between 18 and 20 could still carry them outside of city limits and apply for a permit for carry in urban areas after receiving approved training.

One big piece of the puzzle in gaining acceptance for the legislation was support of law enforcement, which came from the Idaho Fraternal Order of Police and the Idaho Sheriffs’ Association. In other states where permitless carry has failed, it was due in part to opposition from police.

The state is also home to several firearms industry manufacturers, which celebrated the news Friday.