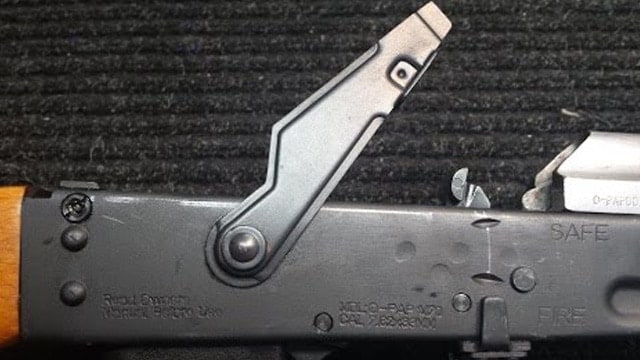 The safety selector on a Century Arms AK-47 pushed above “safe.” (Photo: IntoWeapons)

A $5 million class action suit against Century Arms over an alleged faulty safety lever has been refiled in federal court with new plaintiffs.

The original case was voluntarily dismissed on March 18, the same day the new complaint appeared in the federal court system. Although the complaint was revised to include new plaintiffs and expanded details, the allegations against Century remain the same.

According to the complaint, a host of Century-branded AK rifles and pistols are equipped with a safety selector lever that can be pushed above the “safe” position. In turn, a user can then unknowingly disengage the safety mechanism and accidentally discharge the gun without pulling the trigger.

The lawsuit links the problem to the firearm’s “inadequate design, manufacturing, and testing,” and adds the feature “will not prevent and has not prevented accidental discharge of the guns.”

Century, headquartered in Delray Beach, Florida, and has a business entity in Vermont, is a known importer of Russian surplus weapons including AK-47 rifles. Per federal law, the company must modify the firearms to comply with U.S. regulations before entering them in commerce.

The lawsuit says Century knows about the defect because it has changed the safety selector on current models, but has never issued a warning to the public or recalled defective models.

“Century is aware that the Class AK-47 Rifles and Pistols have fired as result of the Safety Selector defect, and it is only a matter of time, if not already, before individuals are seriously injured or killed,” the lawsuit says.

The class consists of five plaintiffs from around the country and many of which experienced an unintentional discharge with their Century firearm due to the safety lever. In most of the cases, the safety lever advanced beyond the safe position to cause the gun to fire without the pull of the trigger. In one case, a round discharged inside an apartment, ripping through the wall and entering the neighboring unit. None of the instances resulted in injury or death.

The class action suit accuses Century of violating 10 counts of state and federal laws that protect consumers. As an award, the plaintiffs ask for more than $5 million in damages and court costs in addition to the company issuing a recall of defective guns.