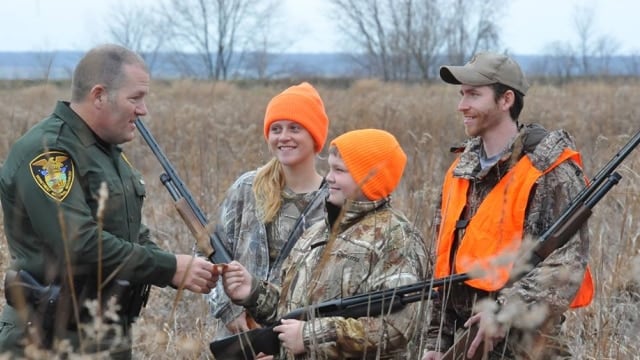 Up until this season, deer hunters in Indiana could only use handguns, shotguns and muzzle loaders as approved firearms. (Photo: DNR Law Enforcement)

The measure, introduced by House Republicans in January passed that body in an easy 84-5 vote before moving on to a 38-12 win in the Senate earlier this month. However, last May the Indiana Department of Natural Resources and the Natural Resources Commission, arguing the state’s 266,500 deer hunters were split on the issue, had already decided against such a move.

Backers of the change argue that fears by some hunters and DNR of putting too much pressure on the herd by implementing a limited season, set to expire in 2020, are misplaced.

“We aren’t increasing the season, we aren’t increasing the deer count you can take,” said Rep. Lloyd Arnold, R-Leavenworth, the law’s author. “There are only five new calibers you can use, and we already have muzzle loaders that can shoot over 300 to 400 yards. I can use every one of those guns 365 days a year for any other species besides deer. Why do we have that restriction? It doesn’t make sense.”

Beginning this July, the law sunsets in January 2020, giving DNR the opportunity to evaluate the impact of the hunt and address potential long-term changes through the Natural Resources Commission.

In support of the change was the National Rifle Association who noted that, “The addition of a rifle season will make hunting more accessible and enhance hunter retention and recruitment efforts in the state.”

Some outdoorsmen argue lawmakers are overstepping their mandate and not allowing the conservation agency and its stewards to do their job.

“We now have the legislature micromanaging the DNR and wildlife management and hunting methods,” said Doug Allman, spokesman for the Indiana Deer Hunters Association. “What’s next, fishing lures?”

As for DNR, the agency posted an announcement about the new law, set to take effect this coming deer season, which made clear of its origins.

“House Bill 1231 was passed by the Indiana General Assembly this year and signed by the Governor. It was initiated by a state legislator and not the DNR,” it read.