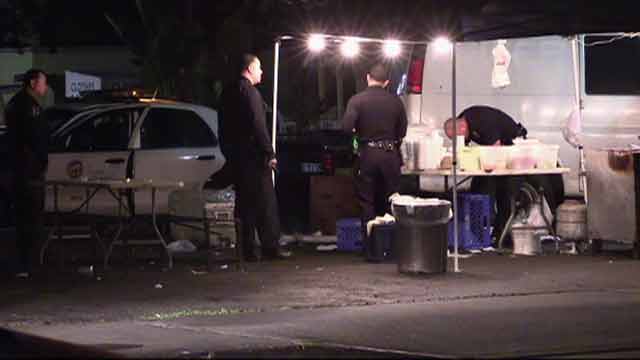 All of the customers reporters spoke with only had nice things to say about the owner of the taco stand and the food he sells. (Photo: KTLA)

An attempted robbery of a taco stand in Los Angeles late Friday night left one suspect dead and authorities searching for the remaining two.

Three men approached Primos Tacos just before midnight, but one of the two employees at the stand grabbed a gun and opened fire on the suspects. One of the suspects, who was only identified as a 19-year-old male, was shot, while his two accomplices fled from the scene on foot, leaving the wounded suspect behind.

Once police arrived on the scene, the suspect was transported to the UCLA Medical Center, where he died a short time later. Neither of the foodservice employees were injured.

As police remained on the scene, family members of the stand’s owner helped tear down the stand so everyone could go home. Local news station KTLA noted bullet holes in the owner’s van. However, it is not known if those came from the victims or the suspects. The Los Angeles Times reported that the suspects were armed, but did not specify the type of weapons they were carrying.

Before packing up and heading out, the two employees were detained by authorities and questioned about the events leading up to the deadly shooting. The employees were released and no charges have been filed at this time. While the incident remains under investigation, Sgt. M. Mason with the Los Angeles Police Department said the armed employee “defended himself.”

But Barnes also noted to reporters that the owner was a nice, genuinely good man too, oftentimes giving young kids food, even when they didn’t have all the money needed to purchase it. Other regular customers expressed similar thoughts to the news station about the owner.