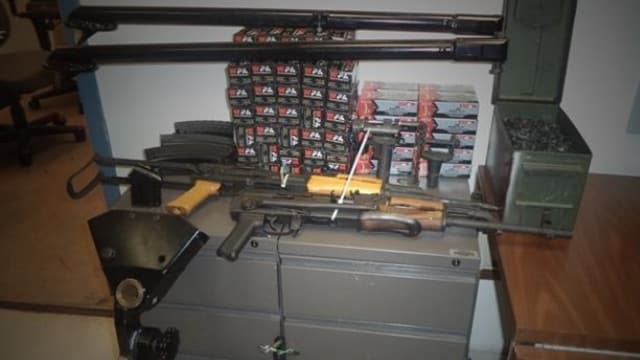 The guns and ammo was found on a routine inspection of a Ford SUV driven by an Arizona woman and an American living in Mexico.

Just three days after U.S. Customs and Border Protection seized 5,560 rounds of ammunition at the Port of Nogales, an SUV with two rifles and more ammo was interdicted at the same crossing.

As noted in a statement by CBP, a 26-year old Phoenix woman and a male U.S. citizen living in Mexico were arrested on March 27 with two AK pattern rifles, 3,000 rounds of ammunition and gun parts as they attempted to cross at Nogales.

An image released by the agency shows the two rifles with assorted magazines, a stack of Wolf and Aguilaa ammo, and a green GI ammo can that appears to be filled with machine gun links.

The vehicle, a Ford SUV, was seized and the two individuals were turned over to Homeland Security Investigations.