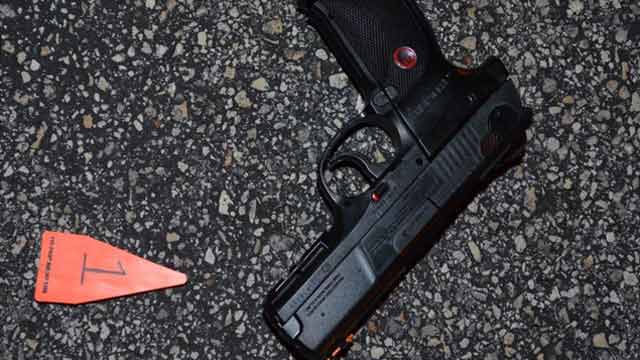 After the shooting, police recovered a Ruger pellet gun from the scene. (Photo: Lakeland Police Department)

A 15-year-old boy is dead and a 16-year-old facing murder charges after a planned attack on an armed security guard at an apartment complex in Lakeland, Florida, early Saturday morning didn’t go as planned.

Shawn Plain, a 19-year-old security guard at the Willow Glen Apartments, was in the laundry room just before 5 a.m., charging his cell phone when he was approached by a group of teens, some of whom appeared to be armed.

According to reports from local media, one of the teens entered the laundry room and shot Plain twice in the face with a pellet gun. Plain initially believed the pellet gun, which had the orange tip removed, was a real handgun, and later told investigators that he thought he had been shot because he could feel his face stinging.

After the assault, Plain pulled out his pistol, causing the group to immediately disperse into the parking lot area.

“Plain exited the laundry room with his weapon in hand, and the suspects continued to point their weapon at him as he took cover,” explained Lakeland police Sgt. Gary Gross. “The suspects turned to flee the area, and Plain fired several rounds at that time.”

The suspect who had just shot Plain in the face was struck in the back of the leg at least once and instantly fell to the ground.

Plain then returned to the laundry room to get his cell phone and call 911, but when he came back outside, the wounded suspect, who was later identified as Stephen Brenor, pleaded with Plain to call an ambulance for him, apologizing for previously shooting him in the face with the pellet gun.

Plain called 911 and when authorities arrived on the scene, Brenor, who police say is a “documented associated gang member,” was transported to an area hospital. He later died from his injuries.

Plain was treated and released for wounds he received on his face during the attack.

The day after the shooting, police caught up with one of Brenor’s accomplices, 16-year-old Javarius Ray’quann King, who is now facing charges second-degree felony murder and aggravated battery. According to Florida state law, because King was an accomplice in a felonious act when Brenor was killed, he can legally be charged with murder, despite the fact that he wasn’t the one who actually took Brenor’s life.

While being interviewed by detectives, King admitted to his part in the assault against Plain, but authorities did not reveal the motive behind the attack.

The remaining suspects are still at large and it is not known if King is cooperating with authorities on identifying them.