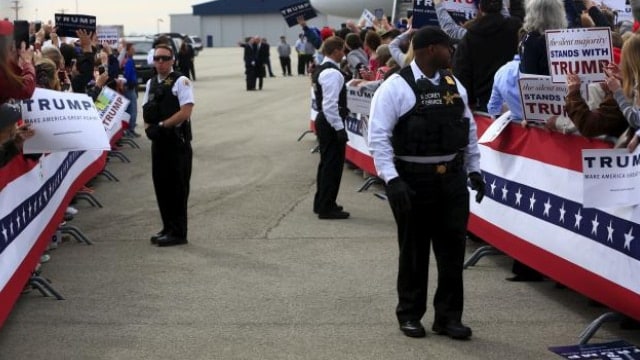 The Secret Service has gone on record as saying there will be no private guns at the Convention, despite an epic internet trolling. (Photo: Reuters/Aaron P. Bernstein)

As it turns out, the creator of the Change.org petition pressuring the GOP to allow guns at their upcoming convention is a Democrat who volunteered for the Obama campaign in 2008.

As reported by CBS and Quartz, who on Monday spoke with the individual taking credit for the online campaign which now has over 50,000 signatures, the shadowy figure is a true-blue Democrat who intends to vote for Hillary Clinton in the upcoming election.

Only disclosing his first name, Jim, the petitioner told CBS he wrote the petition as an over-the-top gesture.

“There were never going to be guns at the convention. Not a million signatures were going to make that happen,” he says.

But he also knew that if the Republican candidates sincerely meant what they have been saying about expanding Second Amendment rights, it would logically follow that they should support a move to allow firearms at the convention. “If they can’t live in accordance with the policies they impose upon us, they owe us that rational conversation,” Jim said.

In his conversation with Quartz, Jim left no doubt where he stood on guns.

“I’m pretty passionate about gun control,” Jim, who prefers to be identified by his first name only, said in a telephone interview. “Every reasonable reaction to this petition was that seems like a bad idea,” he said. “How do you square that with the things they say, like ‘The only way to stop a bad guy with a gun is a good guy with a gun?’”

For the record, Guns.com emailed the petitioner through their blog on Sunday, and is still waiting for a phone call.