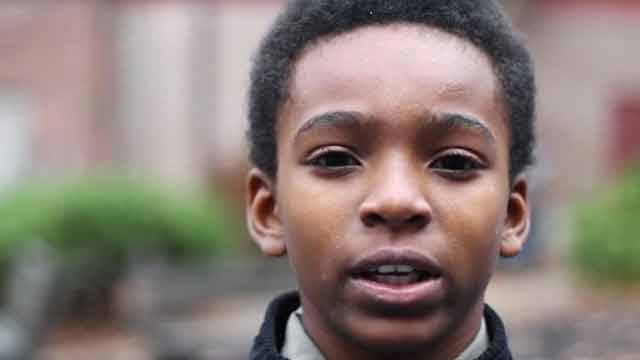 Zarriel Trotter is an innocent victim who was simply walking home after playing basketball at a nearby park when the gunfire erupted. (Photo: YouTube)

A 13-year-old boy who last year took part in the making of a public service video about gun violence in Chicago was shot in the back while walking to his West Side home Friday night.

Zari was one of several Chicago kids featured in the video, which displays the raw emotions felt by third to eighth-grade youngsters living in one of America’s most notoriously violent cities. The minute-long video cites homicide as the leading cause of death among black boys and teens.

But officials confirmed the bullet that hit Zari was not intended for him.

The teen had been playing basketball – as friends and family say he loves to do – and was headed home around 8:30 p.m. when two groups became engaged in a heated argument near where he was walking. As the argument intensified, one of the individuals pulled out a gun and started firing, and one of the bullets struck Zari, who was walking on the sidewalk.

The teen, who was shot in the lower back near his spine, was rushed to a local hospital, where he underwent surgery. He was last listed in critical condition and remains sedated, unable to speak, as his mother reportedly remains at his bedside. No arrests have been made.

Elizabeth Jamison-Dunn, principal of Catalyst Circle Rock Charter School, where Zari attends, was given the news early Saturday morning. She said it was “disheartening” to learn of the shooting and she is continuing to pray for the boy. Jamison-Dunn also noted it was the second shooting near the school, which is a half-mile from Zari’s home, in about a week.

Jamison-Dunn described Zari as a great big brother, great young man, and a valued member of the school community. She said he has attended the school for several years, the last two of which he has become involved in a male empowerment mentoring program.

“Every morning he greets me with a big smile on his face, which makes my day,” Jamison-Dunn told the Chicago Tribune. “I feel horrible that this happened to him.”

A 14-year-old friend of Zari, who was not identified, said he is a good student who has a lot of friends.

“He is cool, he gets along with everyone,” the girl said.

“It gets scarier out here every day,” she added. “Young people in Chicago can’t go outside without knowing whether they will be the next person fired at.”

A Go Fund Me account has been set up to help pay for Zari’s medical expenses, but so far, not a single penny has been met toward the $5,000 goal.