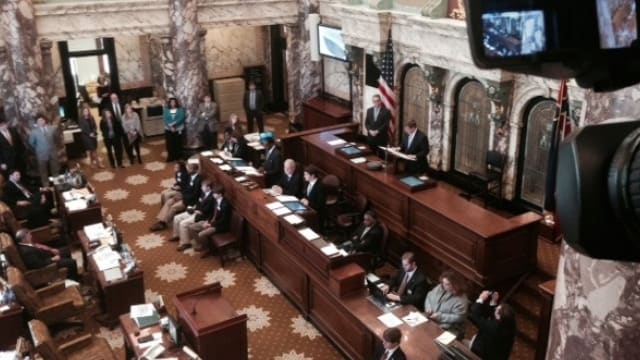 Lawmakers in the Magnolia State have gone on record in both chambers of the legislature in support of letting the Second Amendment be your carry permit. (Photo: WAPT)

A bill that would enhance concealed carry protections while making Mississippi the 10th state to adopt constitutional carry passed with broad support Tuesday.

The measure, which passed the House last month in an impressive 85-33 vote, began life as a church security bill to allow those with a concealed carry permit to have a firearm in church. During its passage through that body, it picked up an amendment to allow unlicensed carry of a concealed gun elsewhere in the state so long as it is in a holster or scabbard on the belt or shoulder. The Senate approved it by a 36-14 vote this week.

Headed back to the House for a concurrence, the bill has the support of both Gov. Phil Bryant and Lt. Gov. Tate Reeves, the latter of whom concentrated on the new church protections in a statement Tuesday.

“Unfortunately, our nation has seen tragic incidents carried out in places of worship,” said Reeves. “Mississippians should be able to attend church knowing they have security measures in place to protect them from anyone trying to do them harm.”

The proposal, HB 786, codifies the allowance for concealed carry by members of designated church programs and extends the current Castle Doctrine protections on justifiable homicide, currently in place in Mississippi for an individual’s home, automobile and business, to their place of worship as well.

There is also language in the measure that would allow for concealed carry reform for all lawful gun owners in the Magnolia State. This builds on laws adopted in 2013 legalizing open carry and one last year to allow for carry in a purse or bag without a permit.

This latter move has drawn fire from national gun control groups who have funded media campaigns in opposition and held rallies at the Capitol in an attempt to sway lawmakers.

“Today’s vote is a dangerous setback for our state that dismantles the concealed carry permitting system that has helped to keep Mississippians safe for years,” said Shirley Hopkins Davis, leader of the Mississippi chapter of Moms Demand Action, in a statement. “Mississippi lawmakers have made it clear that the will of 83 percent of Mississippians who agree that a person should have a permit to carry a hidden loaded handgun in public does not matter to them at all.”

The National Rifle Association argues the bill will keep the state’s concealed carry permitting scheme in place but simply allow for unpermitted carry in addition.

Language added by the Senate prohibiting state or local enforcement of federal executive orders deemed in conflict with the U.S. or Mississippi Constitution needs to be addressed in the House before the bill could move to Bryant’s expected signature.