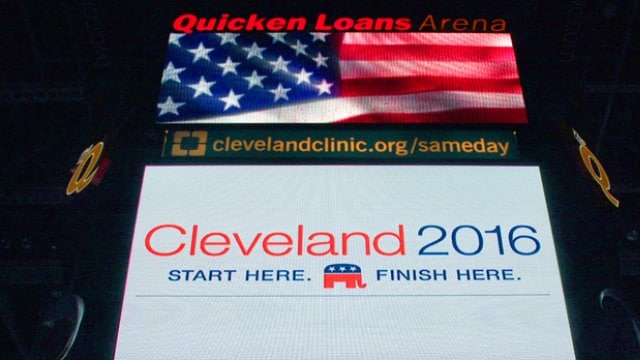 The 2016 RNC will have 50,000 attendees, but will not be allowing them to carry otherwise lawful arms. (Photo: clecityhall.com)

Guns.com spoke with the blogger behind the petition to allow open carry under Ohio law at the Republican National Convention in July about the reasons for the effort.

Started last Monday, over 50,000 supporters were quick to sign on to the effort to pressure the GOP and the three current contenders for the party’s presidential nomination so that legal guns could be carried at the Quicken Loans Arena for the event.

Originated by “Americans for Responsible Open Carry” and promoted as such on social media, the petition is now listed as being authored by the blog Hyperationalist, which is noted to be a staunch gun control advocate and run by a Democrat who volunteered for the Obama campaign in 2008 and supports Hillary Clinton to replace him.

According to the blogger, whose first name is Jim; his party affiliation shouldn’t matter when it comes to the question of gun control at a Republican event.

“I like to point to what I perceive as hypocrisy and I think in this case we could think that there’s a strange double standard when the very convention that really is a big part of the platform is gun rights, open carry, getting rid of gun free zones – when that is a gun free zone,” Jim told Guns.com by phone Tuesday.

Jim feels the current crop of Republicans are “very stark about how dangerous gun free zones are and so for me the goal was just to try to trigger a conversation.”

To be fair, it has long been the policy of the Quicken Loans Arena to ban guns at their venue with exceptions for law enforcement and their own security, and in the end, while the RNC could have relocated their convention to a more gun-friendly area, it was the Secret Service that appears to have made the ultimate decision to not allow privately owned firearms inside their secure area, a policy that would likely follow the convention if it were moved.

“Either it’s an infringement upon your right that the Secret Service – which is an arm of the government – prevents you from carrying your legal firearms at that convention or it’s not,” Jim said.

At some GOP events not secured by the Secret Service – such as the upcoming Texas State Convention in May – party officials have confirmed they will allow both open and concealed carry in compliance with state and local laws. The venue in that instance, the Kay Bailey Hutchison Convention Center in Dallas, normally allows for lawful handgun carry, though it reserves the right to suspend that policy for some events.

Jim says the response he received to his petition was curious.

“The reaction that people had to the petition which was I think almost universally like, ‘Oh, that’s probably a bad idea,'” he said. “Well, I just want to them to look into that a little further and say, ‘All right, well what does that mean? Why shouldn’t there be guns there? And then is there any chance that some other people might be being reasonable when they say there shouldn’t be guns in certain other places? So that was really the goal.”

Jim, who isn’t a gun owner but comes from a background where firearms were not necessarily taboo (“There’s hunters in my family and I don’t have some sort of deep animosity about guns in general”) went on to explain that the petition was not meant to caricaturize gun culture or open carry in general, though he does have uneasy feelings about the latter.

As a Hillary supporter, we asked him to weigh in on the current controversy between his candidate of choice and Bernie Sanders, who have been sparring at recent debates over liability for gun manufacturers as provided by the Protection of Lawful Commerce and Arms Act. It was there that he had a break from Clinton, of sorts.

While he did support assault weapon bans and pursuing smart gun technology, he felt they were better options than, “trying to sue gun manufacturers for making a product that is perfectly legal and its capabilities are well-known,” then continued with, “I think we either regulate or ban certain types of weapons but I don’t see the point in suing gun manufacturers who are making a product that is very well and has been around for a long time.”

The result of his petition, while it will likely not bring guns to Cleveland, Jim argues, did at least broach the subject of gun control with a larger audience.

“So I just think my goal is just look at that reaction and maybe rethink the next conversation you have with a person in favor of gun control and maybe this would be closer to finding some place where we meet in the middle. I don’t know. Maybe we never will but I think it’s a bad idea in some places and it might be a bad idea in other places.”

The Republican National Convention is scheduled for July 18-21, and is expected to have 50,000 attendees.