Alliance: aptly named when it comes to tactical training 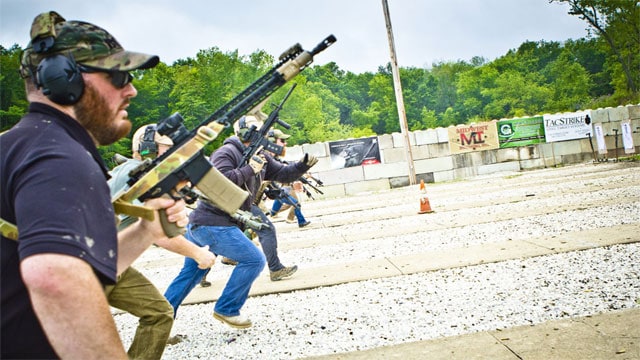 Recent news that Alliance Police Training is offering breaching classes to civilians was so out-of-the-box, we decided to give them a call and find out more about their programs and facility.

Joseph Weyer is director of training at APT, as well as SWAT commander for the Alliance Police Department in Alliance, Ohio.  He filled Guns.com in on APT’s unique approach to the business of tactical training.

The training facility has been expanded since 2006 when Weyer started cleaning up an old police pistol range with a lot of briars and turned it into what it is today. The facility boasts an 8,100-square-foot shoot house, a fuselage for airline emergency simulations, short and long pistol and rifle ranges with steel and regular targets, an MRAP and other military vehicles, a comfortable classroom, a Class 5 walk-in vault for storing guns and gear while in town.

Also, “the nicest bathrooms you’ll ever see at a training center,” Weyer said, adding other tactical exercises are offered right in the town of Alliance. The program launched its first professional class in 2008.

Weyer explained the facility’s calendar stays full with in-house instructors as well as some who come from outside. “Six-thousand students came through last year and we didn’t have every class filled to capacity,” he said.

Given the features of the facility, it’s perhaps no surprise that local police and Ohio State Police train there regularly, along with groups from the Secret Service, FBI, and other federal, state, and municipal entities, and also civilians.

“Law enforcement isn’t against civilians. We want qualified civilians to train with us.  A lot of people are intimidated by that, and they don’t need to be,” Weyer said. 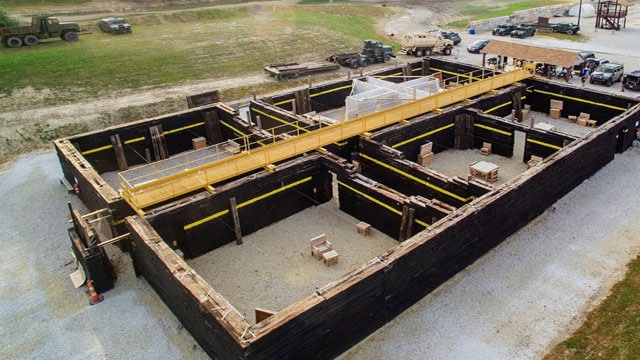 APT’s massive shoot house and some of its military vehicles. (Photo: jwramp.com)

The facility’s policy for admission of civilians into anything but beginner and concealed carry classes is a valid driver’s license and a valid concealed carry permit from their state of residence, or, if they reside in a non-issuing state, a permit from a state that does.

“We welcome civilians into more basic classes at first, to assess and develop their skills if that’s needed, and to develop rapport,” Weyer said in assurance that a class like explosive breaching techniques isn’t a walk-in opportunity for civilians.

“This is an inexpensive place to train,” he said, noting the facility gives discounts from already low rates to locals and veterans. The APT website refers to the facility as a “not-for-profit” one, so we inquired how it works economically.

The APT business model gives new meaning to the word “alliance” in the training world. The property is owned by the City of Alliance. Weyer is the SWAT Commander of Alliance Police Department, and has his own training company, Weyer Tactical. Weyer’s enthusiasm for training led to a proposal to the mayor some years ago to develop  a world-class training facility, operated by a company owned by local officers and veterans.  “The mayor said go for it, and the community’s been a part of this ever since,” Weyer said.

Local patrons may get training discounts, but it’s clear that locals have embraced the facility and made their own investments.  A local business makes promotional banners for civic groups and private companies, local and non-local, gun-related and not, when those companies donate labor and goods for the facility.  It’s truly a community effort.

“Another reason it’s less expensive to train here than elsewhere are things like the discount we have with Holiday Inn Express, very affordable local air service and the Akron/Canton airport 20 minutes away, and Great Lakes Ammo has a discount for students and ships their ammo here free, so they don’t have to deal with hauling ammo on their trip,” Weyer said.

That’s an unusual business model for a training outfit, but it gets remarkable. Alliance Police Training (the company) has a deal with Alliance (the city) to train in abandoned houses and other buildings.  APT ensures the structures are structurally sound and safe.  For the period of time between when the city has tagged a property for possible demolition, APT uses the buildings to teach tactics like room clearing, forced entry, and force-on-force. These exercises don’t use live ammo — APT even enjoys donations of pricey Simunition, (colored glycerin pellet) ammunition.

Nothing is free, or as Weyer said, “anything that’s worth doing is a lot of work.” The City of Alliance benefits from its arrangement with APT on abandoned buildings. Weyer and co-workers literally mow lawns, board up broken windows, and whatever needs to be done between the time a house is taken possession of by the City and demolition.

In the days prior to a tactical exercise, Weyer distributes notices about the event to neighbors’ mailboxes to prevent folks from thinking the occasional influx law enforcement at a property is anything more than training.

“Broken window syndrome” refers to the causative relationship property deterioration has with juvenile delinquency and general criminal activity.  Both in their maintenance-for-access arrangement and in the presence of law enforcement during training, Alliance is preventing the syndrome without having to add patrols.  It’s a win-win, powered in part by sweat.

“We are proud to offer our local officers and local people world-class training right here at home and we attract agencies from Ohio, surrounding states, federal, and even a few international clients, because it’s so convenient, everything’s here,” Weyer said.

Alliance Police Training and the City of Alliance have shown the training world the meaning of alliance.  That, and hard work have indeed created a world-class training center.