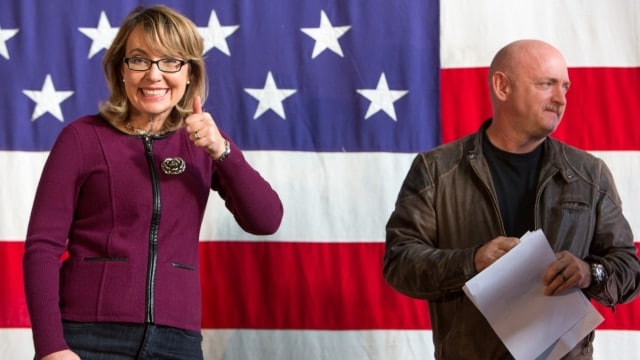 Giffords and her husband, former astronaut Capt. Mark Kelly, announced the “Virginia Coalition for Common Sense,” at press conference in the Richmond Tuesday after debuting a similarly named Delaware group in Wilmington on Monday.

The gun safety advocates argue the states have a number of loopholes in their gun laws which need to be addressed, prompting the need for the local groups.

“Stopping gun violence takes courage – the courage to do what’s right, and the courage of new ideas. I’ve seen great courage when my life was on the line,” said Giffords in statements repeated for the Delaware and Virginia groups. “Now is the time to come together – to be responsible! Democrats, Republicans – everyone.”

Prepared statements from Americans for Responsible Solutions, Giffords’s national organization, also contained the same quotes from Giffords used in the earlier announcements for the other three state groups established in the past four months.

The initiatives backed by the new organizations include an expansion of background checks to include most private gun transfers and increased reporting of mental health records by the state to the Federal Bureau of Investigation’s National Instant Criminal Background Check System.

In Delaware, inaugural members of the Giffords’ coalition include the leadership of the Delaware Coalition Against Gun Violence and League of Women Voters of Delaware as well as New Castle County Councilmember Janet Kilpatrick and human rights advocate Beverley Baxter.

A former Republican who lost her seat after one term to a GOP challenger while running as an Independent, Waddell, 77, argued stronger gun laws transcend party.

“Keeping guns out of the hands of criminals is not – and must not – be a partisan idea,” she said in a statement. “Today is yet another sign that Republicans, Independents, and Democrats can come together in support of responsible solutions that help keep guns out of the wrong hands and save lives. It’s up to our leaders in Richmond to follow suit, do the right thing and help build a safer Virginia.”

Americans for Responsible Solutions earlier this month merged with the Law Center to Prevent Gun Violence in the fight to advance gun control legislation.