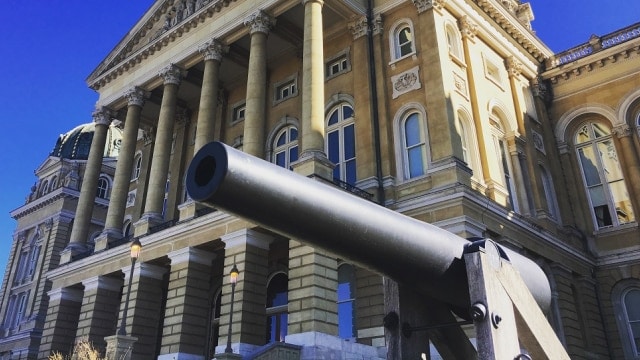 The push to legalize the sound moderating devices has gone on for three years with previous attempts starting strong but never making it through the legislature. This session was different, with a House bill gaining an easy 74-24 win in February before the Senate gave its approval in a 46-4 vote.

In the lead up to this week’s signature, Branstad welcomed the suppressor legislation, saying it “will not only save people from hearing loss, but also could create some jobs in Iowa.”

Ben Hammes, a spokesman with Brandtad’s office told Guns.com the Governor was pleased to see bipartisan support for the measure from state lawmakers, adding, “This bill will reduce hearing loss for Iowans and hunters who enjoy sport and competitive shooting.”

The new law, which became effective immediately upon the Governor’s signature, passed as HF 2279, a simple five-page bill to repeal the state’s near total ban on National Firearms Act-compliant sound muffling devices. Prior to Thursday, the state prohibited private citizens from owning an otherwise legal suppressor under threat of a Class D felony, which is punishable by as much as $7,500 in fines and up to five years in prison.

Suppressor manufacturers argue the key to increased adoption of the devices rests in demystifying their use.

“Governor Branstad signing HF 2279 into law is a great representation of how much we can achieve through education initiatives,” Josh Waldron, CEO of SilencerCo, told Guns.com in a statement. “Once Iowa legislators became more familiar with the positive and responsible uses of suppressors, HF 2279 was able to pass without issue. It is our hope to see the remaining eight states that do not allow silencers for civilian purchase follow in Iowa’s footsteps.”

The American Suppressor Association, Iowa Firearms Coalition and the National Rifle Association, among others, championed the law.

In celebration of the HF 2279’s passage, the ASA will be hosting a public suppressor shoot on April 16 at the Big Springs Shooting Complex in Searsboro, with free admission and ammunition.