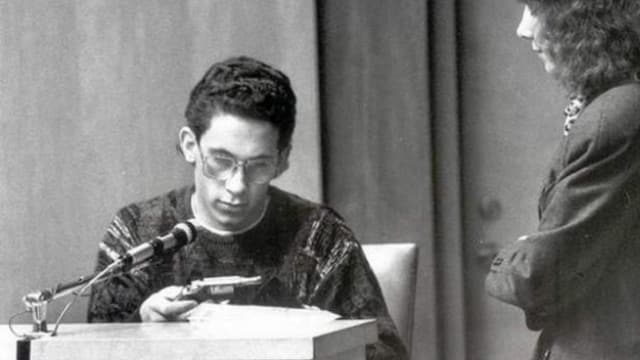 Vance “J.R.” Lattime Jr. during the 1991 Pamela Smart murder trial, shown holding the .38 Charter Arms revolver used in the killing. While Lattime himself was freed in 2005, the gun, stolen from his father, has been held in evidence. (Photo: Portsmouth Herald)

A gun owner whose stolen revolver was used in the conspiracy of New Hampshire teacher Pamela Smart to kill her husband in 1990 is finally getting his gun back.

The murder trial, in which prosecutors painted Smart as convincing her 15-year-old lover, high school student William “Billy” Flynn, to kill her husband with the help of three other teens, Patrick “Pete” Randall, Vance “J.R.” Lattime, Jr., and Raymond Fowler, drew intense media attention at the time and triggered numerous books and films.

Now the owner of the .38 Charter Arms snub nosed used in the crime, Lattime’s father, Vance Sr., was granted a motion by a state Superior Court to recover the gun stolen he turned over to police over two decades ago as reported by WMUR.

“Lattime Sr. is an innocent owner,” wrote Judge Andrew R. Schulman in his 13-page ruling. “He did not give his son permission to take his gun. He did not know that his son took his gun. He had no idea that his son was going to use the gun to commit a murder. Therefore, Lattime Sr. has done nothing to forfeit his property…”

Although noting that “items associated with infamous crimes are sold to the highest bidder on eBay” and that what was “once mundane and fungible becomes valuable due to its totemic significance and the blood of the victims” Schulman admitted that the state had no legal hold on the gun and Smart’s lawyers had no objection to its release.

“Lattime Sr. is entitled to the return of his gun, holster and ammunition,” Schulman wrote after saying the value of the firearm was likely less than what he spent on his legal battle for its return. “He can decide whether he really wants it.”

Smart is the only defendant in the case still behind bars. Flynn, sentenced originally to life in prison, was released after nearly 25 years last summer on his 41st birthday. His three accomplices were likewise paroled between 2005 and 2015

The murder and its salacious details were the basis for the television film Murder in New Hampshire: The Pamela Wojas Smart Story, starring Helen Hunt as well as for Gus Van Sant’s film To Die For, starring Nicole Kidman and Matt Dillon as the married couple, and Joaquin Phoenix as the wife’s lover.