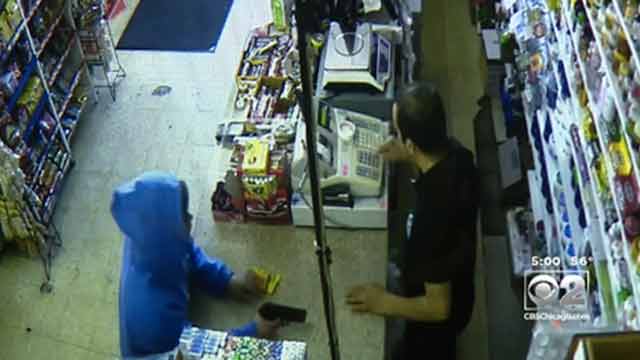 The police chief said the 16-year-old was lucky he didn’t get shot and even luckier he wasn’t killed. (Photo: CBS Chicago)

An attempted robbery at a Mexican grocery store in Des Plaines, Illinois, Saturday morning was foiled when the owner pulled out a pistol of his own, sending the teen suspect and his accomplice fleeing from the store.

The two suspects – both 16 years old – are now in custody and Des Plaines police Chief Bill Kushner said it is thanks, in part, to the attentive store owner, video surveillance and witnesses who came forward with information about the suspects. Kushner also added the teens are responsible for at least half a dozen armed robberies in the area.

Security cameras at the Nuevo Mexico grocery store captured the moment the suspect entered the store, as his accomplice waited outside. The teen, whose name has not been released because he is a juvenile, walked up to the register wearing a hoodie and placed a candy bar on the counter. Seconds later, he pulled what appeared to be a handgun from his pocket and demanded cash from the clerk.

But the clerk had other plans and instead of grabbing the cash, grabbed a gun from behind the counter. Upon seeing this, the suspect immediately ran out of the door, with the clerk chasing behind him. As the suspect and his accomplice fled from the scene, the clerk fired three shots, none of which struck the suspects.

The entire incident was caught on video and witnesses gave authorities a description of the young suspects’ getaway car, as well as the direction in which they fled. Kushner, however, said authorities recognized the suspect on the video, noting the two were “not strangers by any stretch of the imagination.” In fact, one of the suspects was previously involved in gang activity, according to Kushner.

Authorities caught up with the suspects about two hours after the attempted robbery, CBS Chicago reported, after the getaway car was seen outside of a beauty salon where the armed suspect was getting a haircut.

Both of the teens were taken into custody and admitted to six different robberies. They are now facing aggravated robbery charges for all of those incidents.

Additionally, authorities discovered that the weapon the suspect was carrying during Saturday’s robbery attempt was only an airsoft pistol.

“People are going to get killed as a result of crimes with airsoft guns and they’re not going be the victims, they’re going to be the offenders,” Kushner told ABC 7.

Kushner also confirmed that the suspect was responsible for a previous robbery at a Dunkin Donuts, in which he was seen walking with a limp, which was apparently caused by a sawed-off shotgun the suspect had stuck down his pants.

When reporters asked Kushner what he believed the motive was behind the robberies, why the teens needed the cash, he replied with a laugh, “Probably because it was easier than working.”