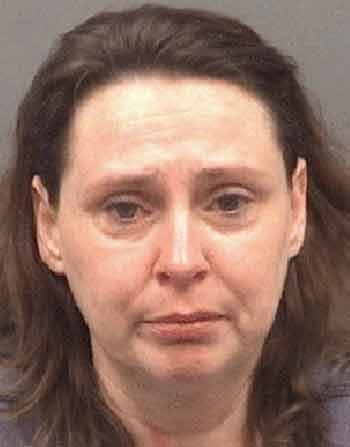 A woman was arrested Monday after she reportedly pointed a gun at two energy workers as they attempted to shut off the power at her home in Rowan County, North Carolina.

The sheriff’s office received a 911 call from Michael Buchanan, who is employed by Duke Energy. Buchanan told police he and a coworker, who was only identified as Devontae, arrived at the property in a marked vehicle and were going to shut off the woman’s power when she came outside and started yelling at them. Buchanan said they tried to talk with her about her bill, but she refused to discuss the matter and instead went back inside the house and returned with a loaded .40-caliber Smith & Wesson M&P.

Jamie Honeycutt allegedly aimed the gun at the two workers and told them they were “not going to leave.” Buchanan said upon seeing the gun, he took cover behind the house and called 911, while Devontae climbed back inside their work truck for safety.

When police arrived on the scene, Honeycutt was standing near the truck with her holstered handgun on her hip, and told them a very different story. She said she never threatened the workers. She said she simply had the gun because she was home alone and did not know who the strange men on her property were. She claims she didn’t see the Duke Energy decal on the truck until after she already confronted the men, but that she also never pointed the gun at them and was simply holding it.

Nonetheless, Honeycutt was arrested and charged with Assault by Pointing a Gun. She is being held on a $500 bond and is scheduled to appear in court next month.