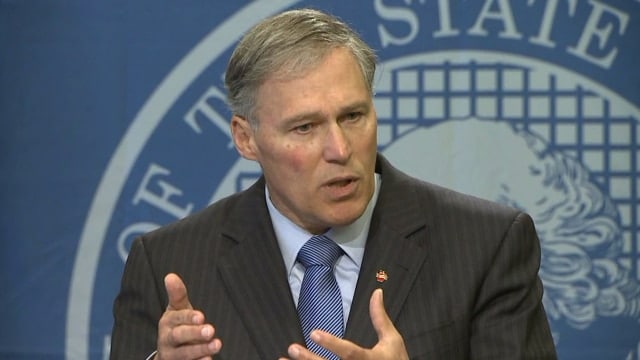 Democrat Gov. Jay Inslee this week signed legislation backed by a diverse coalition of groups united in an attempt to curb the number of suicides in the Evergreen State. (Photo: Q13 FOX News)

Washington Gov. Jay Inslee signed a measure that aims to help drop the number of suicides through a partnership of pharmacies and gun dealers on Thursday.

The new law will establish a task force and develop materials and training to spot signs of someone at peril from what they term the “nation’s most preventable form of death” in a state where the suicide rate is 14 percent higher than the national average, and is the eighth leading cause of death among Washingtonians.

Introduced in January, the proposal passed the Senate in a unanimous vote and the House by a near-unanimous 94-2 vote.

“I believe this new partnership can find effective ways to raise awareness of suicide and to save precious lives,” said the bill’s prime sponsor, Rep. Tina Orwall, D-Des Moines, in a statement. “These actions are so important because we know that suicide is the most preventable form of death.”

The group will help the state Department of Fish and Wildlife update its firearm pamphlets to include suicide awareness materials while gun dealers would be eligible to participate in as a “safe homes partner” in exchange for a tax credit. Firearms dealers are required to give a copy of the pamphlet to new gun purchasers.

Further, pharmacists in the state will have to undergo a one-time training on suicide assessment, treatment, and management.

The rare combination of support by both gun rights and gun control groups on the same legislation was held up as an example of how the two could work towards a common goal.

“The process that went into creating this legislation clearly demonstrates that the firearms community is not only approachable, but is willing to participate in any serious discussions about a problem that affects us all,” SAF founder and Executive Vice President Alan Gottlieb said in a statement. “It is firearms groups and professionals that are the real gun safety experts, so it is only proper and prudent for us to be involved.”

By July 1, 2017, the WDFW must update the firearms pamphlet with suicide prevention messaging developed by the Task Force, who must begin reporting to the legislature on its pilot program by the end of 2016.