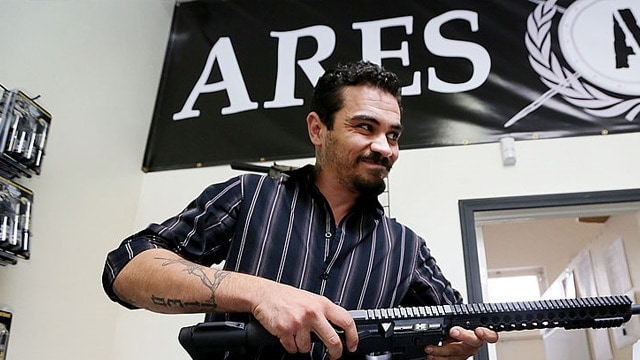 Dimitri Karras, former owner of Ares Armor, behind the counter at the Oceanside storefront in 2014. (Photo: Getty Images)

Two of the three parties involved in a trademark suit between Ares Defense and the company formerly called Ares Armor agreed to voluntarily dismiss the case Tuesday.

Ares Defense agreed to drop allegations against Bryce Stirlen, the owner of American Weapons Components, formerly Ares Armor, as long as he paid his court costs, but that leaves his former business partner, Dimitrios Karras, who no longer works for the company, as the lone defendant.

Ares Defense established in Melbourne, Florida, in 1999 and makes firearms for civilians, military and law enforcement. Ares Armor launched in 2010 out of Oceanside, California, to sell firearm parts and accessories.

Details of the agreement between Ares Defense and Stirlen are unclear. Mention of settlement discussions were made during a hearing in February but attorneys were unable to discuss the matter in greater detail. However, in December, five months into the lawsuit, Stirlen changed the name of the company — which is the focus of the case.

The dismissal request comes on the heels of the court ordering mediation to be held at an Orlando federal courthouse since a harassment case exists between the Sterlin and Karras and neither party expects the matter to be resolved quickly. According to court documents, a California state court requires Stirlen to remain at least 300 yards away from Karras and his family.

Conflict between the two defendants started brewing before the alleged trademark violation had been filed. Days before the case launched in July, the two had a public falling out over business agreements in which Karras sold majority shares and assets of Ares Armor to Stirlen’s investment firm Lake House Capital Management. Although they agreed Karras would maintain 30 percent of the business, Sterlin fired him sometime in the months between. Their business dealings remain unresolved.

When they announced the arrangement in March 2015, Karras said he agreed to sell so he could focus his efforts on fighting an ongoing court battle against the Bureau of Alcohol, Tobacco, Firearms and Explosives. The agency raided the company’s Oceanside storefront in 2014 after Karras refused to release a list of customer names. Unfinished AR lower receivers, the company’s staple product, had been the subject of controversy in the Golden State because owners could create an unserialized firearm.

According to court records, Karras alongside his attorney appeared at a hearing regarding the trademark case on Feb. 9. Both his attorney and counsel for Ares Defense presented arguments whereas Sterlin had counsel present but only to observe.

At the hearing, Ares Defense argued Karras, operating one or two business entities, sold firearm-related products branded Ares Armor through its California shop and the Internet to customers nationwide and in Florida, where Ares Defense operates.

Counsel for Ares Defense argued Karras used the name “Ares” to intentionally confuse Florida customers and that harmed its sales. Although Ares Defense does not have a federal registration, the company’s attorney argued it could proceed with the case based on common law rights and state trademark.

On the other hand, Karras’s attorney argued the name “Ares,” the Greek god of war, is a common name within the gun industry, according to the transcript. That and Karras no longer runs the company.

The defense introduced a similar argument in a motion to dismiss the lawsuit for lack of jurisdiction, but the court denied the request on March 10.

Attorneys representing Sterlin and Ares Defense did not respond to Guns.com’s requests for comment.

A hearing for mediation is scheduled for May and a trail date, if the case makes it that far, is set for November 2017.