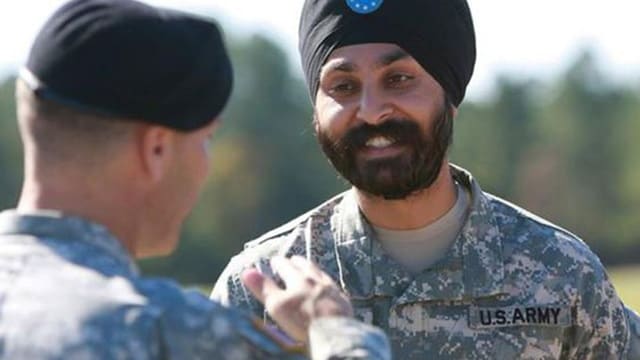 Capt. Simratpal Singh has served in the Army for nearly 10 years. (Photo: The Sikh Coalition)

The U.S. military granted a Sikh Army officer long-term religious accommodations Friday allowing him to serve while maintaining his articles of faith, i.e. a beard and turban.

Capt. Simratpal Singh, a decorated combat veteran, became the first active duty Sikh soldier to receive approval to maintain his articles of faith under the landmark decision. He had filed suit at the beginning of March to receive a permanent waiver, a request he sent in October.

His request gained broad support. In November 2015, 27 retired U.S. generals called on the U.S. Department of Defense to eliminate the ban. They joined 105 members of Congress, 15 U.S. Senators, and 21 national Interfaith and civil rights organizations, who have previously signed letters in support of American Sikhs’ right to serve. The endeavor was also endorsed by Secretary of State Ash Carter.

The Sikh Coalition, the civil rights group that represented Singh, sees the decision as making progress toward ending religious discrimination in the nation’s largest employer. The organization, along with two other activist groups, filed suit on March 29 on behalf of three other Sikh soldiers for the same accommodations.

“My faith, like many of the soldiers I work with, is an integral part of who I am,” Singh said in a statement released by the civil rights group.

Singh graduated from West Point with honors in 2010, but due to Army regulations was required to discard the religious articles.

“My military service continues to fulfill a lifelong dream,” he said, adding, “I am thankful that I no longer have to make the choice between faith and service to our nation.”

Singh will continue in his battalion operations staff position at Ft. Belvoir, Virginia.