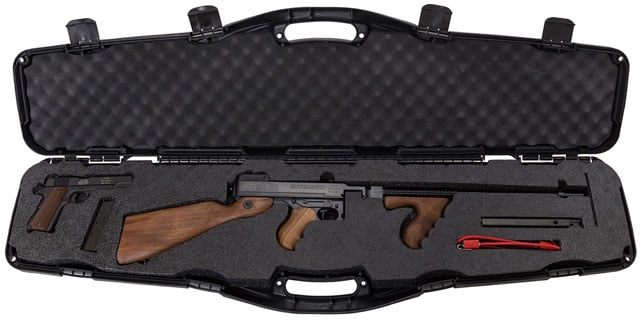 Auto-Ordnance is offering a boxed set of two classics, the Chicago Typewriter, AKA Tommy Gun, and a 1911A1 pistol, in observation of the Tommy Gun’s 100-year anniversary.

Though the .45 ACP semi-auto Chicago Typewriter is renowned for showing up in the hands of Prohibition-era gangsters, the new release highlights earlier history of the firearm, which pre-dates U.S. involvement in World War I.

The faithful reproductions, finished in blued steel and walnut, come boxed together in a hard case bearing the “Chicago Typewriter” and Thompson logos. Both guns are stamped with the Thompson bullet logo. They’re sold only as a set; MSRP $1,971. This is a limited edition of 1,500.

The Thompson sub-machine gun, designed first as a tool for clearing enemy trenches, was the brainchild of John T. Thompson, a West Point graduate originally from Newport, Kentucky. In the Army, Thompson studied engineering and artillery, and took an interest in small arms design.

After retiring from the Army and entering employment as Chief Engineer at Remington Arms, Thompson designed the platform in 1916. He re-enlisted when the U.S. became involved in the war, eventually being promoted to Brigadier General.

Thompson perfected the design after the war’s end, and was awarded a patent in 1920. By then, military applications were mostly moot, so he marketed the gun to police agencies and in the civilian market.

Thompson never lived to see his design fulfill its intended use. Shortly after his 1940 death at age 79, the U.S. Army placed large orders for Thompson submachine guns for the World War II effort.