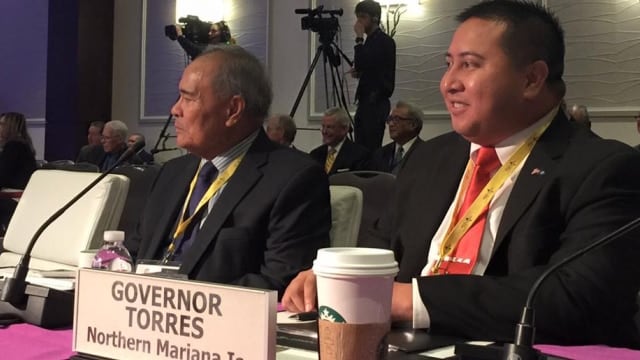 Gov. Ralph DLG Torres fears allowing pistols and revolvers in the commonwealth would change the very fabric of the Marianas. (Photo: cnmileg.gov)

Last month Chief Judge Ramona Villagomez Manglona, of the U.S. District Court for the Northern Mariana Islands, ruled the Commonwealth’s 40-year-old total ban on handguns was incompatible with the Second Amendment, saying “because the people of the Commonwealth are part of the American people who have overwhelmingly chosen handguns as their principal means of self-defense, the Second Amendment protects that right here as well.”

Now, area lawmakers in the island chain of 53,000 inhabitants, who rely on Department of Defense jobs in Saipan and Tinian as well as tourism revenue streams, are afraid of what the case means for local gun laws.

“This is changing the whole CNMI, our protection, our lives,” said Gov. Ralph DLG Torres, as reported by the Saipan Tribune. “It has changed the way we have enjoyed the freedom and the luxury of not having handguns.”

While some in the Commonwealth legislature are pushing for an appeal to fight the ruling, even contemplating asking billionaire tech guru Bill Gates for assistance, the Marianas Senate met in emergency session and passed a sweeping measure on March 30 that seeks to drop the lid on what is seen as a Pandora’s box of gun rights.

The 57 pages of SB 19-94, deemed the Special Act for Firearms Enforcement include establishing gun free zones around schools, government buildings and places of worship; mandatory use of gun locks for firearms not in use; bans on .50BMG rifles; a prohibition on the carry of firearms outside of the home for self-defense; licenses required to possess firearms or ammunition; bans on Title II firearms such as suppressors, short barreled rifles and machine guns and an assault weapon ban similar to those in California and New York.

While there are exceptions for law enforcement, some government employees and military personnel, violations of the proposal could incur as much as a 15-year prison sentence. Possession of a single handgun cartridge without a valid license alone could bring a $2,500 fine.

The Senate bill has not been taken up by the House, who declined in a 12-8 vote not to return for an emergency session to consider the measure. However, House Vice Speaker Joseph P. Deleon Guerrero is hopeful they will be able to weigh the proposal soon, arguing it is a simple piece of legislation.

“It’s 57 pages but very straightforward. It clearly states how you can carry a handgun, how you can store it, what the do’s and don’ts are, and the penalty for violations. It does not require long hours of reading,” argued Guerrero.

Some officials contend time is of the essence, arguing public safety concerns mean more security will be needed since more legal guns will be in the islands.

“It’s a game changer for my law enforcement officers,” said Commonwealth Ports Authority executive director, MaryAnn Lizama, responsible for security in the islands’ air and seaports. “This whole right to bear arms with the handguns, now we have to beef up security.”

As for public opinion, some are urging lawmakers to move on and establish regs on handguns as soon as possible.

“The federal court has made its ruling and the plaintiffs have won their case, but the CNMI government can still impose restrictions on handguns,” wrote Saipan resident Ben Garrett in an op-ed for the Marianas Variety. “I am sure CNMI leaders can decide what types of handgun can be legalized just like the gun law regarding rifles.”

The plaintiffs in the court case, U.S. Navy veteran David J. Radich and his wife, Li-Rong, are reportedly looking forward to being able to own a handgun, or any gun for that matter, having applied for a firearms license in 2013 following a home invasion. No such permit has been issued.