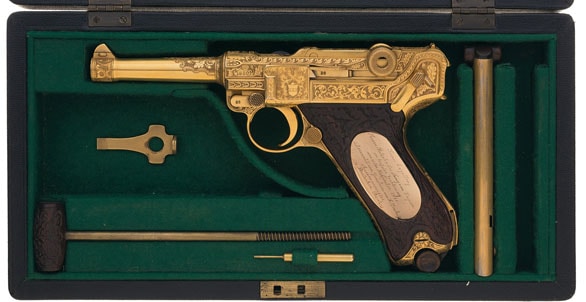 This Mauser with a Nazi pedigree is up for auction. (Photo: Rock Island Auction Co.)

Rock Island Auction Company has up for bid a historic relic of a pistol—a gold-plated, intricately engraved Mauser 9mm Luger, accompanied by a paper trail proving its Nazi pedigree.

The Mauser has a four-inch barrel and carved walnut grips. The chamber is stamped “1939” and bears the Mauser banner logo. It was reportedly procured for the German Ministry as a standard Commercial Police Model, as indicated by the sear safety over the side plate. Other indicators of its history as part of a German Ministry police purchase are the “eagle/C” police logo on the right side of the barrel extension, and the “crown/U” on the left side of the barrel extension.

Other gold engraving depicts the traditional German oak leaf, acorn and scroll, with a punch dot background for shading. There’s also an engraved plate on the left of the grip that reads (in the English translation): “His Excellency the Honorable Ambassador Franz von Papen, in deepest dedication, given by Joachim von Ribbentrop, Foreign Minister of the German Reich.” 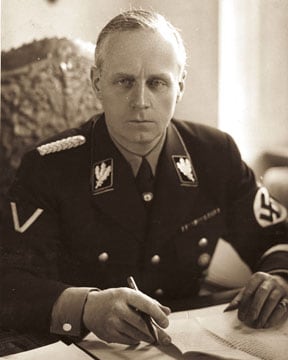 The pistol is being auctioned with an authentication letter from a Mauser factory rep, dated 1986. There’s also a letter from Egbert von Papen, allegedly a great-nephew of Franz, confirming the gun’s transfer from Ribbentrop to his uncle.

The gift-giver in this case was a decorated WWI veteran and son of a German officer who had served with the 125th Hussar Regiment before sustaining a serious injury in 1917. The injury caused him to leave battlefield work for a less physically demanding, if not tamer, career in politics.

In 1932, Joachim von Ribbentrop joined the National Socialist German Workers Party where he quickly rose in rank, becoming Hitler’s foreign affairs advisor. The NSDAP evolved into the Nazi party where he was appointed ambassador to London and helped craft a peace treaty with the Soviets that stood until Germany violated it in 1941.

Despite repeated denials of his involvement in the genocide that the era is known for, Ribbentrop was first to be hanged as a result of the Nuremburg trials in 1946.

The recipient of this shiny gift lived quite a bit longer.

Franz von Papen was born in Germany in 1879, the son of a wealthy landowner. He was assigned to Washington as a military attaché in 1914, but was sent home less than a year later as a result of sabotage claims. In WWI, he served as a general staff officer.

After the war, he purchased the national newspaper Germania, from which he was ousted for his outspoken, right-wing views. In 1932, his political career was revived when he was appointed chancellor. 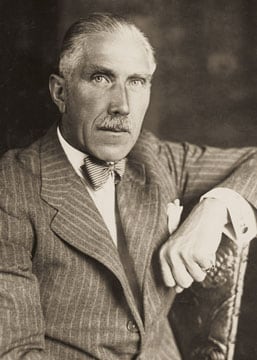 Franz von Papen was a key influence in the later appointment of Hitler as the new chancellor, while making himself vice-chancellor. A strong Hitler supporter, von Papen became ambassador to Austria, serving 1934-39, and then acting as ambassador to Turkey until 1944.

Von Papen was more fortunate in court than his generous friend. In 1945, he was found not guilty of conspiracy to start WWII. In 1947, the German government charged him with crimes and offenses under Hitler’s leadership. Von Papen was convicted but only served two years of his eight-year prison sentence. He died in 1969.

Rock Island Auction Company estimates the minimum value of the gun to be $50,000. Perhaps a deal can be made—as of this writing, the opportunity for the first bid is open at $45,000.