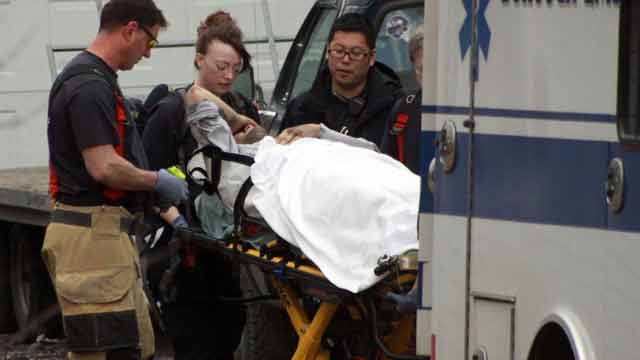 A man wanted by authorities out of Wasilla, Alaska, was apprehended last week thanks, in part, to an armed homeowner who shot the suspect during a physical altercation.

Just before 4 p.m. Wednesday, troopers spotted a Ford Ranger matching the description of a truck sought in connection to a recent rash of burglaries in the area. Additionally, the truck was said to have “multiple equipment violations” and was going about two times the posted speed limit.

An officer initiated a traffic stop, but instead of slowing down, the driver, who was later identified as Codey Tallman, 24, sped away and led authorities on a high-speed chase that included driving past a stopped school bus full of children. Eventually, Tallman jumped out of the truck and continued to flee on foot through a residential neighborhood, the Mat-Su Valley Frontiersman reported.

After running through several yards, Tallman soon came upon one of the residents, who knew the man was wanted and instructed him to stop. Tallman reacted to the request by shoving the resident. But when Tallman charged the homeowner for the second time, the man pulled out a gun and shot the suspect.

Officers, who were nearby setting up a perimeter in an effort to catch Tallman, heard the gunshot and responded immediately. They arrived on the scene in less than a minute and found Tallman suffering from a gunshot wound to the leg.

Tallman was transported to an area hospital, where he was treated and released into police custody. Tallman now faces charges for felony eluding, fourth-degree misconduct involving a controlled substance, driving under the influence of drugs, fourth-degree assault, reckless driving, violating conditions of release, reckless endangerment and passing a school bus with red lights activated.

The homeowner, who was not identified publicly by authorities, suffered minor injuries during the altercation. Although ultimately the district attorney will decide whether they are appropriate, no charges have been filed against the homeowner at this time.