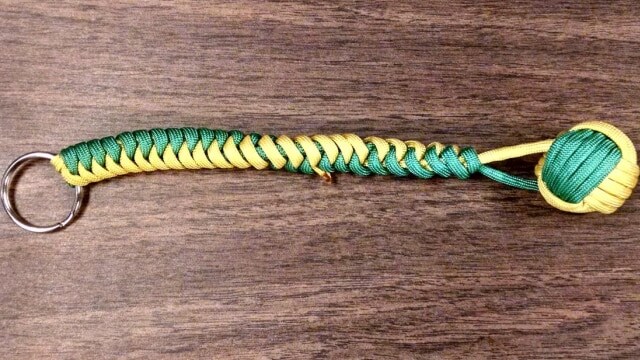 The slungshot, banned for 148 years, is legal again in the nation’s southernmost state. (Photo: Sun Sentinel)

A simple tool designed by sailors and a staple of handcraft artists in Florida has been decriminalized for the first time since 1868 with the support of Second Amendment advocates.

Not to be confused with slingshots, slungshots are crafted from a weight or shot tied to a cord. Used for generations by sailors to help throw lines when mooring, they were often carried for self-defense purposes and were made illegal in Florida after the Civil War, punishable by a misdemeanor.

Now, with Republican Gov. Rick Scott’s signature on a bill to legalize the weighted rope constructs on March 24, the slungshot will been stricken from the state’s list of illegal concealed weapons.

For lawmakers, the move just made sense.

“[T]here’s a lady here in town who’s been making these things and giving them away as keychains,” said State Rep. Neil Combee, R-Polk City, primary sponsor of the legislation. “Now, as far as I’m concerned, they leave a lot to be desired when it comes to a personal defense item. But people don’t know it’s against the law to carry them.”

Combee’s bill, HB 4009, was a repeat of his measure from last session that died on the calendar without action. It passed this session in unanimous votes in both chambers of the legislature as no lawmaker mounted an attempt to oppose the move.

Under its guidelines, the new law will delete slungshot from the list of weapons illegal for Floridians to carry, making the humble handicrafts legal to sell and possess. The state will continue to ban dirks, metallic knuckles, billie clubs, tear gas guns, and chemical devices – excepting self-defense chemical spray – as concealed weapons.

Second Amendment advocates in the Sunshine State contend the obscure law needed to be scrubbed. In fact, in conversations with law enforcement and lawmakers on the subject, they rarely know what a slungshot is, much less its original purpose.

“There are a lot of arcane laws on the books that people never heard of, serve no useful purpose and need to be repealed. This was one,” Marion Hammer, executive director of the Unified Sportsmen of Florida and past president of the National Rifle Association, told Guns.com Monday. “I talked to numerous law enforcement officers and asked them what they thought of slungshots. Not one, I repeat, not one had even heard the word much less knew what they are or that it was against the law to manufacture, sell, own, posses or carry one.”

Hammer told Guns.com previously that more than a century ago, when the tools were more widespread, they were much more commonly encountered, much as if someone would carry a flashlight or pliers today.

Worse, slungshots are often made and sold in area gift shops as an arts and crafts item, which under state law was technically illegal.

“We should be punishing bad behavior – not criminalizing the making of crafts and self-defense tools. The Constitution guarantees the right of self-defense yet Florida law takes away the right of women use inexpensive tools to protect themselves,” said Hammer.

The law was effective immediately on Scott’s signing.