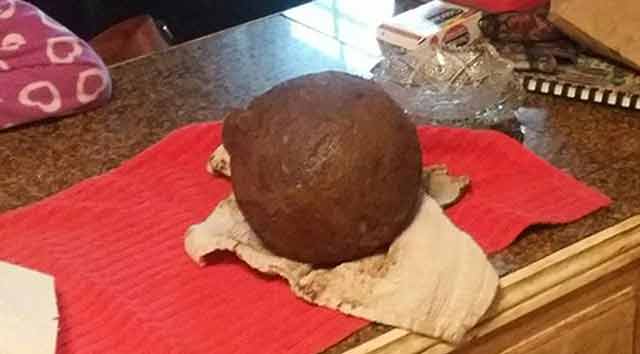 While doing some work on a backhoe in Danville, Arkansas, Matt Bell came across what he and the guy working with him thought was a cannon ball, but it turned out to be something a little more explosive.

Bell said they just sort of tossed the artifact in a ditch while they finished working, then he took it to the Arkansas Civil War Museum so experts there could take a gander.

“I look at it and I realize it’s got a pressure plate on top of it and I’m like, ‘You probably need to put that down,’” said Jerry Luckett, the museum’s curator. “That’s a 32-pound landmine. You probably don’t want to be holding that like that. This is an active landmine. It still has explosives inside.”

Luckett said Bell was – figuratively – blown away by his find, which he carefully took home, then called the police for help in disposing of it. Authorities contacted the special munitions team from the Little Rock Air Force Base, who came to defuse the situation.