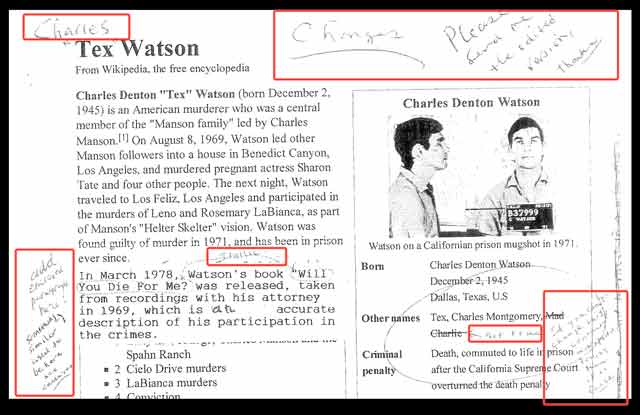 Charles “Tex” Watson, the former Manson follower accused of murdering more than half a dozen people, including Manson Family member Sharon Tate, was apparently unhappy with some details on his Wikipedia page and took appropriate action – from the confines of his prison cell.

“The requested changes were presented as a printout of the 16 February 2016 version of this Wikipedia article, annotated with handwritten notes by the subject of the article. A copyright release was sent with the notes. The scan of the notes is uploaded to Commons,” explained a volunteer for the free encyclopedia website under the “edit requests” section.

Of course, some of the requests are just basic errors, such as the fact Watson attended Cal State University, not the University of California, as the page states.

But other errors are, some may say, downright creepy. Watson set the record straight on some details of the gruesome Tate murders, noting that he assisted in killing Abigail Folger, rather than stabbing her seven times on his own, as the page indicates.

Additionally, Watson wanted other, previously deleted details, added back to his Wikipedia page, such as, “In 1975, Watson converted to Christianity; he co-authored an autobiography entilted Will You Die For Me? Once Ready to Die for Charles Manson, Now Living A New Life for Christ in 1978.”

The requested edits have not yet been made to Watson’s Wikipedia page, but The Wikipedian’s William Beutler noted, “It does seem that Watson has done at least a bit of research into how Wikipedia works: he understands there should be citations, and knows he can lobby for the removal of uncited material—although it seems more likely someone will just find a news story about the signature drive than remove this detail.”