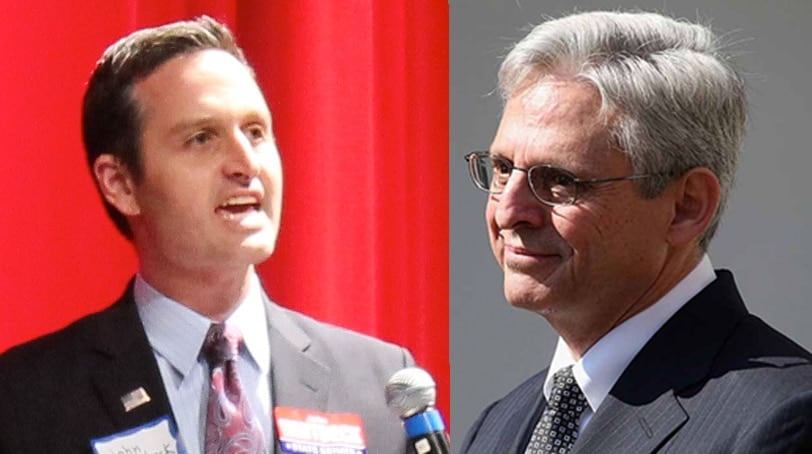 The Republican Party chair in an email last month blasted Garland, sitting chief judge on the U.S. Court of Appeals for the District of Columbia, saying gun rights are “hanging by a thread” with the passing of Justice Antonin Scalia and President Obama’s nomination of “an avowed opponent of our Second Amendment.”

“When Justice Antonin Scalia wrote his watershed opinion in D.C. v. Heller, it marked the first time that an individual right to keep and bear arms was recognized by the Supreme Court by a razor thin 5-4 vote,” Whitbeck wrote, adding Garland voted to uphold the district’s gun laws, which essentially banned possession of handguns in the home.

Politifact rated the claim “False” because though Garland serves the court which heard Heller, he wasn’t on the panel of three judges who ultimately ruled the D.C. law unconstitutional.

Garland did, however, call for a rehearing of the en banc case by a full court, Politifact reported. The move isn’t unusual, Politifact noted, and conservative D.C. Circuit Judge A. Raymond Randolph also called for the case to be reheard. Politifact also pointed to the George W. Bush administration’s support of sending the case back to the lower court for broader definition.

“Garland voted for his court to consider the constitutionality of D.C.’s law,” UCLA Second Amendment law expert Adam Winkler recently told PolitiFact. “Such a vote does not tell us one way or another how Garland feels about the Second Amendment.”

But Whitbeck’s office told Guns.com by phone Tuesday that’s just “splitting hairs” and that Garland “had a certain position in mind.”

Scalia’s death created a rift in the country and left the court potentially split on some of the most important constitutional questions of our day. Scalia’s death was a huge loss for the gun rights community and the Garland nomination is seen as an affront to the Second Amendment he championed.

GOP leadership in the Senate has stalled the confirmation process by not calling for a hearing or a vote on Garland’s pending appointment. Some Republican lawmakers have met with the SCOTUS nominee, though none have actually broken party lines in calling for a confirmation hearing.

Iowa Sen. Charles E. Grassley, chairman of the Judiciary Committee, on Monday met with Garland to tell the nominee why the GOP won’t hold hearings.

Pennsylvania Sen. Pat Toomey agreed last month to meet with Garland and said he would consider the chief judge’s appointment should the next president nominate him.