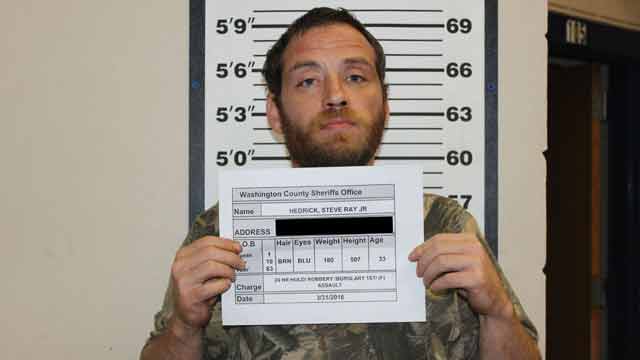 Steve Ray Hendrick, Jr. first claimed he had no part in the fiasco, but later came clean and confessed to attempting to rob the elderly man of prescription pills. (Photo: Washington County Sheriff’s Department)

Two men intent on stealing prescription drugs from an elderly man in his rural Washington County, Missouri, home Thursday night did not take into account that, although the man appeared to be frail, he was armed with a Walther 9mm.

According to the homeowner, whose name was not released, he was in his home around 10 p.m. when he saw headlights pulling into his driveway. The elderly man, who is on oxygen 24 hours a day and was hooked up to an oxygen tank at the time, got up and went to the door, which was unlocked.

The homeowner saw the two men walk up to his door, one of whom he recognized, while the second man’s face was covered with a mask. The homeowner, who had previous dealings with the unmasked man, according to reports from the Daily Journal, told the man to leave. But instead of leaving, the two suspects forced their way inside.

The suspects began shoving the elderly man, while demanding prescription narcotics. The homeowner told the suspects he did not have any pills and to leave him alone, but they continued pressing him as the encounter became more violent.

Following a brief struggle, the man who was known to the homeowner, pushed the elderly man down and threw him on a couch. The man then got on top of the homeowner and began beating him. But what he didn’t know was that the elderly man kept a handgun between the cushions of his couch.

The homeowner was able to retrieve the gun, pressed it against his assailant’s body and pulled the trigger, inflicting a gunshot wound to the suspect’s abdomen. At that point, the two suspects left the house and fled the property in a sedan.

The homeowner called the police and Washington County Sheriff’s Department Captain Zach Jacobsen, who was actually on another call at the time, was immediately dispatched to the man’s home, but while en route, another 911 call came in to the nearby Potosi Police Department about a man who had been shot.

Jacobsen said when he arrived on the scene, the home invasion victim was suffering from shortness of breath and some sort of heart problems. The officer also observed the elderly man had multiple abrasions and bruising. He was transported to the hospital, but his condition is not known.

About the same time, authorities were responding to the second 911 call and found a man at his residence, suffering from a gunshot wound to the torso. Authorities quickly realized the injured man was likely the same one who was shot during the home invasion. That suspect, whose name has not been released, was transported to a St. Louis hospital where he is still in critical, but stable condition.

Steve Ray Hendrick, Jr., 33, the suspect who was not injured, was arrested and charged with a class C felony of attempted robbery in the second degree, a class B felony of burglary in the first degree and a class D felony of tampering with physical evidence.

Authorities say after Hendrick and the second suspect, who is his uncle, left the elderly man’s home, Hendrick tossed the mask he was wearing out of the moving car and changed his pants in an apparent effort to hide his actions. Hendrick also told the police a very different story about what happened that night.

Hendrick claims he was not a part of the home invasion and simply rode with his uncle to the man’s house to collect a debt his uncle said he was owed. Hendrick admitted his uncle said if the man did not have the money, that he was going to be beaten, but Hendrick also claimed he had no part in that. Hendrick said he was waiting outside in the car when he heard an argument between the two men, followed by a gunshot. He said he then saw his uncle walk out of the front door and collapse. According to Hendrick’s account, he helped his uncle get into the car, then drove him to safety.

However, Hendrick later changed his story and confessed to his part in the crime. He is being held on a $75,000 bond.