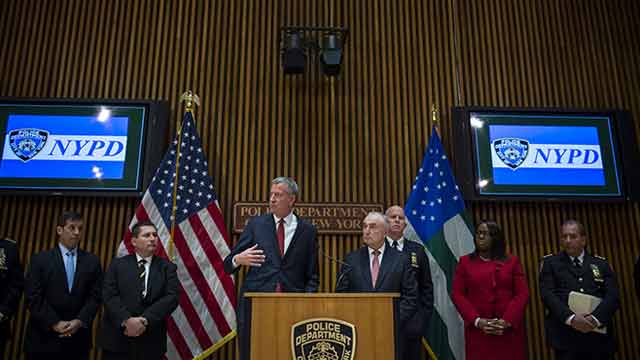 In a press conference Monday, New York City Mayor Bill de Blasio praised the efforts of city officials and law enforcement for the parts they played in bringing the city’s homicide rate down to the lowest it has been in recorded history. But while murders continue to fall, authorities are dealing with an increase in stabbings.

As of Sunday, there have been 68 homicides in New York City so far this year, compared with 86 for the same time as last year, a 21 percent decrease. Furthermore, despite a small uptick over the last 28 days, the city has also seen a 14 percent drop in shootings this year, compared to 2015.

De Blasio pointed to the New York City Police Department’s increased attention toward getting guns off of the streets as the cause for a drop in violent crime. Officials say gun seizures are up over 15 percent, with more than 800 guns already confiscated this year. Likewise, gun-related arrests have also increased by more than 13 percent.

However, the number of stabbings and slashings in the city for the first quarter of the year has increased by more than 20 percent to 899, compared with the same time last year, which saw 746 such assaults.

Commissioner Bratton said stabbings are one of the few crimes currently seeing an upward trend in the city, and noted that they are increasing “at a level that is a concern” to law enforcement. But Bratton also assured those types of assaults are receiving additional crime-fighting efforts by authorities, and he believes those numbers will come down.

Despite the concern over an increase in stabbings, de Blasio pointed to more positive statistics, including a nearly 6 percent drop in all major crime categories across the city over the past two years. He said New York has seen extraordinary progress.

“I remember vividly what things were like in this city when we had over 2,000 murders a year, when even walking down a busy street you had to look over your shoulder,” de Blasio said. “I remember how life was, how many people left because they thought this city couldn’t possibly succeed. Well, the NYPD turned that around.”

The mayor also indicated he believes some strategies were “backward” in previous years, noting a significant drop in stop-and-frisk procedures.

“The city was alienating the very people that we need to protect,” he noted. “By reducing the tensions between police and community, we’re getting more cooperation from community members.”

Nonetheless, de Blasio now contends that The Big Apple is “the safest big city in America.”