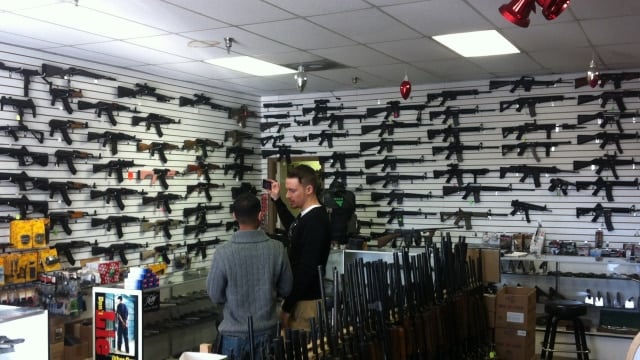 The legislation, which mandates fines of $2,000 per day, per incident of non-compliance, would require multiple cameras and record all gun sales. (Photo: cctvcorp.com)

A California proposal to require video surveillance of shops including all purchases and parking lots as well as put a limit on gun store locations was pulled in the face of mounting opposition.

The measure, introduced in February, is meant to increase transparency in the legal sale of firearms and ammunition in the state and discourage straw buyers according to its primary author, Democratic Assemblymember Kevin McCarty.

Scheduled for its first hearing in the Public Safety Committee on Tuesday, McCarty pulled the measure without comment.

The legislation, AB 2459,  would prohibit a firearms dealer from operating from a building zoned as a residence, require them to carry $1 million in liability and theft insurance, and mandate extensive video surveillance requirements. This would include recording every firearm or ammunition transfer, everywhere guns or ammo are stored or handled, the exterior of the business, and all parking areas. The video would have to be stored for five years on site.

In an analysis by Marshall Lewin for America’s First Freedom, published by the National Rifle Association, the data storage alone would be enough to put some gun stores underwater.

“Even if it was digital, that’s a lot of hard drives,” noted Lewin. “Let’s see: Four cameras recording 50 hours per week for 50 weeks per year times five years is 50,000 hours of video. At a resolution that ‘makes the facial features of the purchaser clearly visible,’ that five years of footage is going to occupy 750 terabytes. Got 300 hard drives? Got somewhere ‘on the premises’ to store them for five years?”

Similar requirements proposed in San Francisco led to the closure of the last gun shop in that city in 2015 that left lawmakers who backed the new guidelines unapologetic.

The proposed new regulations drew condemnation from gun rights groups including the NRA, National Shooting Sports Foundation and the Firearms Policy Coalition. However, as Craig J. DeLuz, director of communications with the FPC, told Guns.com, it’s not just Second Amendment organizations up in arms against AB 2459.

“We have spent a lot of time and energy building a coalition against the measure,” said DeLuz. “So far, the ACLU and the CA Pawn Brokers were opposing it. And your gun bill has to be pretty bad for the ACLU to oppose it.”

He warns that, should McCarty move to bring the matter back up with amendments, they will be ready and likely have even more support.

McCarty’s bill, which includes civil fines of up to $2,000 per day, per incident of non-compliance, has the support of gun control organs including the Law Center to Prevent Gun Violence, who have long advocated increased scrutiny of dealers, and the Brady Campaign.

In his 10 years as a Sacramento city councilman, McCarty pushed increased regulations including special use permits for any new gun store within city limits, which helped earn him an “F” rating from the NRA.