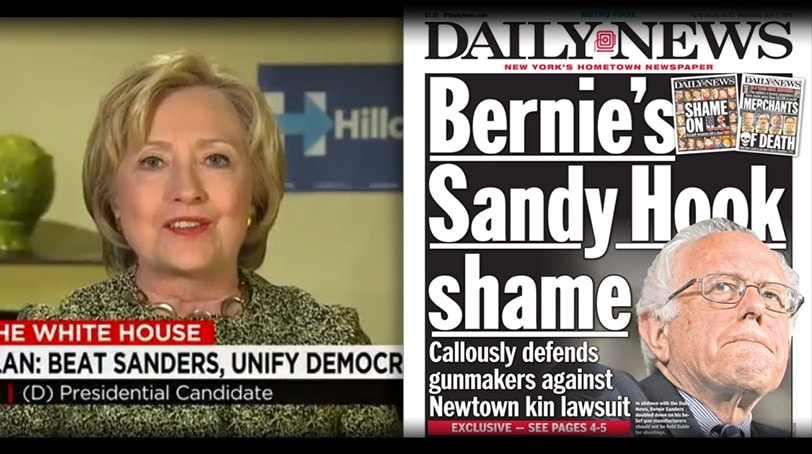 Hillary Clinton appeared on CNN Wednesday, when she congratulated her opponent Bernie Sanders for his win in Wisconsin. She also criticized him for a number of things, including his stance on immunity for gun manufacturers. (Photo: CNN / New York Daily News)

Democratic presidential candidate Hillary Clinton on Wednesday again criticized her rival, Vermont Sen. Bernie Sanders, for his stance on legal immunity for gun manufacturers whose products are used in the commission of a crime.

“When it comes to guns we have a really serious difference and I was appalled that Sen. Sanders said he really didn’t see any reason for the parents children massacred at Sandy Hook in Connecticut to be try and be able to sue the gun makers,” Clinton said.

The comment comes a day after the full transcript was released of Sanders being blasted by the editorial board of the New York Daily News for not having specific enough details about many of his key talking points and for opposing the right of the families of Sandy Hook shooting victims to sue manufacturers who created the guns used in the December 2012 shooting spree.

Bushmaster Firearms manufactures the AR-15 semiautomatic rifle used by the gunman to kill 20 small children and six adults at the Sandy Hook Elementary School in Newtown, Connecticut. Parent company Freedom Group has held up the 2005 Protection of Lawful Commerce in Arms Act – which Sanders supported and Clinton opposed – to shield itself from liability in a case filed against it and sub-group Remington Arms by the victims’ families.

Before being termed the “modern sporting rifle,” the AR-15 was being marketed by Bushmaster and others as a rifle with “military-proven performance” and “the ultimate combat weapons system.”

It’s this advertising that has left the company open to legal attack by those who would seek to link the semiautomatic AR-15 to the military’s fully automatic rifles in an attempt to prove Bushmaster sold a weapon it knew was capable of killing a large amount of people efficiently in a short amount of time. Bushmaster was sued in Connecticut Superior Court in December 2014 and filed for dismissal in February.

When asked by the New York newspaper if he thought the families of Sandy Hook victims should be able to sue the gun manufacturer, Sanders replied “No, I don’t.”

“But I do believe that gun manufacturers and gun dealers should be able to be sued when they should know that guns are going into the hands of wrong people,” Sanders added. “So if somebody walks in and says, ‘I’d like 10,000 rounds of ammunition,’ you know, well, you might be suspicious about that. So I think there are grounds for those suits, but not if you sell me a legal product.”

Sanders went on to tout his poor rating from the National Rifle Association, which gave him a D- during his Vermont Senate bid in 2012. The NRA previously told Guns.com Sanders also received a C- during his run for the same seat in 2006.