Lawmakers approve $1,000 tax on handguns in lieu of total ban 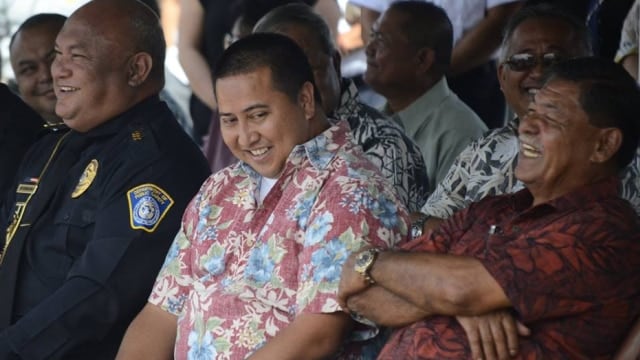 CNMI Gov. Ralph DLG Torres, center, is expected to sign one of the nation’s newest and most restrictive gun control laws into effect in coming days. (Photo: cnmileg.gov)

Just 11 days after a federal judge rejected the Commonwealth of Northern Marianas Islands’ ban on all handguns as unconstitutional, the legislature has approved a severe gun control measure.

On March 28, Chief Judge Ramona Villagomez Manglona, of the U.S. District Court for the Northern Mariana Islands, ruled the territory’s 40-year-old total ban on handguns was unconstitutional, saying “because the people of the Commonwealth are part of the American people who have overwhelmingly chosen handguns as their principal means of self-defense, the Second Amendment protects that right here as well.”

In a reply to the court order barring enforcement, the Commonwealth Senate passed a strict 57-page gun control proposal last week to which the House added a $1,000 per pistol excise tax, which the Senate approved unanimously on April 7, sending the bill to Gov. Ralph DLG Torres for expected signature.

As reported by the Marianas Variety, Sen. Paul A. Manglona voiced support for the tax in the Senate, saying it would decrease the expected number of handguns coming into the island.

The now 59-page SB 19-94 will establish gun free zones around schools, government buildings and places of worship; requires the mandatory use of gun locks for firearms not in use; establishes a prohibition on the carry of firearms outside of the home for self-defense; requires licenses to possess firearms or ammunition; forbids Title II firearms such as suppressors, short barreled rifles and machine guns and establishes an assault weapon ban similar to those in California and New York.

While there are exceptions for law enforcement, some government employees and military personnel, violations of the proposal could incur as much as a 15-year prison sentence. Possession of a single handgun cartridge without a valid license alone could bring a $2,500 fine.

Concerning self-defense and justifiable homicide, the act mandates a duty to retreat if possible before using deadly force.

The handgun tax – with a one-year sunset clause after which the legislature will revisit the matter with input from law enforcement – is considered by gun rights advocates to be prohibitively expensive in the territory where the per capita GDP is only $13,300 per year and the population has been nearly halved in recent years due to the collapse of the local garment industry, resulting in 17 percent unemployment.

At the CNMI’s current minimum wage of $6.05 an hour, it would take an individual more than a month of regular workweeks to raise enough money alone to pay the gun tax.

“This is definitely a case of the power to tax is a power to destroy a right,” Second Amendment Foundation Executive Director Alan Gottlieb told Guns.com Wednesday. “Most people in the CNMI cannot afford this tax and will not be able to exercise their rights.”

Gottlieb advised the SAF attorneys who won the suit overturning the handgun ban are already looking at a challenge to the $1,000 excise tax should it become law.