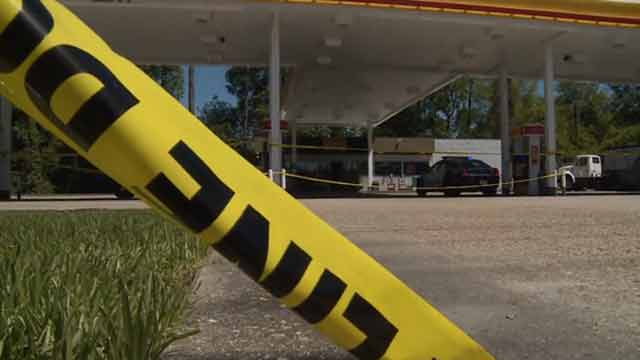 Area residents told reporters they were shocked to hear of the incident and noted that nothing of that sort ever happens in the area. (Photo: WWL)

A man was fatally shot during a dispute at a Mandeville, Louisiana, gas station Monday morning in what authorities say at this point appears to be a case of self defense.

Police first received a phone call just after 10 a.m. from a Shell station clerk who was having trouble with an unruly customer, later identified as Shawn Breland, 42. Breland apparently made a purchase at the gas station, then began harassing the clerk. The clerk, in turn, asked the man to leave, and while he left the store, he came back inside several times to continue to heckle the clerk.

Another customer, who was openly carrying a holstered handgun, also tried to persuade Breland to leave, but he refused. The clerk then called the police for assistance in having Breland removed from the store.

But before officers arrived, things escalated.

Breland began yelling racial slurs and throwing bags of potato chips at the clerk, before he walked outside again. This time, the second customer followed him out in an effort to get his license plate number for the police. But when Breland saw this, he got out of his vehicle and attacked the man.

After he was assaulted, the armed customer unholstered his gun and retreated back into the store. However, Breland followed him and continued to attack.

Capt. Ron Ruple with the Mandeville Police Department, told local media the store’s surveillance video shows Breland, who was notably larger than the other man, physically attacking him and also reaching for his gun. Ruple said the man told Breland to back off and warned him that he would shoot if he did not. Breland ignored the warnings as the man continued to put distance between them. Ruple said the man moved all the way to the inside corner of the store, and fired a single shot when Breland continued to come at him and he no longer had any other place to retreat.

Breland was struck by the bullet, which appeared to only further infuriate him. Even after being shot, Breland went to attack the customer again, and the man fired two additional rounds, again striking Breland, who then fell to the ground.

A short time later, officers arrived on the scene. Breland was transported to an area hospital, where he was pronounced dead.

Police did not release the name of the armed citizen, but confirmed he was a concealed carry and self-defense instructor. They said the shooting was filed as an act of self-defense, but once the investigation is completed, the case will be forwarded to the District Attorney, who will determine whether it will be reviewed by a grand jury.