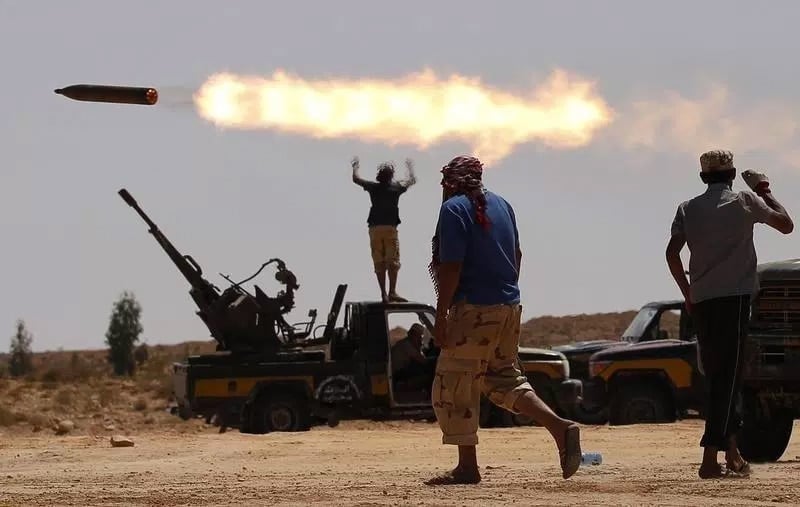 Missiles, grenade launchers, anti-aircraft guns and heavy machine guns were among the armament that groups in Libya attempted to transfer since September 2014, according to a new report tracking online trade of arms in the North African country.

Libya has been mired in chaos since the fall of the Gaddafi regime in 2011. Though tyrannical, the removal of Muammar Gaddafi – also referred to as Qaddafi – created a power vacuum in Libya that was easily filled by ISIS.

Put out by Ares Armament Research Services, the report was commissioned by the Small Arms Survey in Geneva and tracked 97 trades or sales over an 18-month period. The sample data, taken from a database maintained by ARES, only represent a portion of a much larger report to be released in 2-3 months, according to Ian McCollum of Forgotten Weapons, also an ARES researcher and co-author of the report.

“We’re interested in understanding the mechanics of the illicit arms trade,” N.R. Jenzen-Jones, ARES director, told Guns.com by phone Friday. “The Hollywood notion of planes full of guns being rapidly unloaded is rare. It happens on a limited basis, but typically these weapons are diverted from the authorized trade.”

The report concluded those transfers were being conducted in large or important population centers. The transactions could reflect the needs of non-state Libyan armed groups or a way for them to get rid of unwanted or obsolete weaponry, the report found. And because of price, more expensive light weapons are typically purchased by groups and not individuals, who usually tend to buy small arms.

A majority of the weapons for sale where the country of origin was traceable came from the Warsaw Pact region, which includes former Soviet Russia and the current Russian Federation.

The gun trafficking could also illustrates a shift in the kind of fighting the people in Libya are engaged in.

“The relative absence of certain light weapons (most notably mortars and crew-served recoilless guns) from online arms-trading platforms is noteworthy, given the substantial numbers of such weapons possessed by both the Qaddafi regime and rebel forces during the 2011 revolution,” the report reads. “Most of the light weapons for sale originate from pre-1992 imports by the Qaddafi regime, although some systems were imported during the 2003-2011 period, and one possibly after 2011.”

The research group followed eight social media groups, six of which focused sales on Tripoli and surrounding areas. Benghazi was another area of focus for one of the groups and another on Zawia and Sabha.

The New York Times reported it presented Facebook with examples of suspicious groups on its platform and the company shut down six of them. The social media company in January banned the sale of firearms on the Facebook platform and Instagram, its photo-sharing application, but because of the sheer number of groups Facebook manages, it could be nearly impossible to monitor all the groups posting in Arabic. Facebook didn’t respond to requests for comments on the number of Arabic-speaking moderators it employs.

The illicit arms trade in the Middle East is slow to catch on to social media, but is likely to increase its online presence in the coming years, the researchers said. For McCollum, the fact that they’re using social media isn’t all that surprising.

“All social media networks are at the core just communications platforms, and there is no reason why people wouldn’t use them to trade in arms just like they trade in anything else,” McCollum said during an open Reddit question-and-answer session Friday.