How FireClean got called 'Crisco' 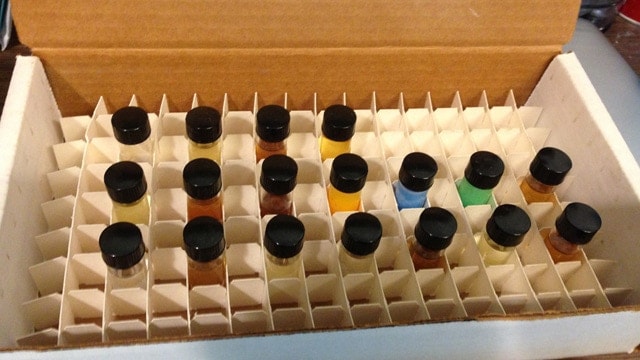 Samples of 18 different oils, including FireClean and Crisco, for a second round of infrared spectroscopy tests in October 2015. (Photo: Granite State Guns)

Ever since the chemical composition of FireClean gun oil was juxtaposed with multiple types of Crisco cooking oil, the lube maker said it has lost more than $25,000 a month in revenue.

The company blames Andrew Tuohy and Everett Baker for perpetuating the characterization that FireClean is equivalent to cooking oil, and George Fennell, who owns a competing lubricant company, for spreading the rumor that FireClean is Crisco. Although both are damning conclusions, it was the Crisco aspect that started the proverbial kitchen fire.

The issue gained notoriety in September when Tuohy published test results on his website Vuurwapen Blog of an infrared spectroscopy, a test used to identify chemicals, to compare FireClean to two different types of Crisco oil. He said he did so because he had heard the rumor circulating that “FireClean is nothing more than Crisco” and wanted to investigate it further.

Tuohy, who lives in Arizona, said he had a chemistry professor at the University of Arizona perform the test. He described the professor as a Ph.D in organic chemistry, but not by name.

Test results showed very similar plot points for Crisco canola oil, Crisco vegetable oil, and FireClean. “I did not – and still do not – believe that FireClean is Crisco,” he said in the initial post and that the test showed: “FireClean is probably a modern unsaturated vegetable oil virtually the same as many oils used for cooking.”

Those details were quickly aggregated by other websites — one headline even read “Yes, It’s True: FireClean is Crisco,” according to court documents. The connection was also shared in thousands of social media posts and expressed as criticisms in reviews on retail websites.

Tuohy maintained his statements in follow up posts. Then, in October, a second round of spectroscopy tests were performed at the Worcester Polytechnic Institute by Baker, who attends the school and had taken an interest in the issue. Although Baker’s tests had similar — but not identical — results, he detailed his methodology by including steps of the process, equipment used and scientists involved.

“I feel confident when I say that the FireClean I tested is canola oil without the addition of any corrosion inhibitors, stabilizers, or other enhancement materials,” he said in a post on his blog, Granite State Guns. He added that his advisor, who is a professor of chemistry, and other chemists agreed with his findings. In turn, Tuohy shared the results on his website.

By November, FireClean issued a statement to dispel rumors that its product was re-packaged Crisco oil, canola oil or simple vegetable oil. “These claims are false and dangerous,” the company said and urged patrons “not to consume or use FireClean in the preparation of food.”

Although many readers inferred that FireClean was cooking oil because of the tests results, neither Tuohy nor Baker explicitly called it Crisco. Both declined to be interviewed for this article and instead pointed to the materials they published on the matter.

On the other hand, Fennell was identified as the first to compare FireClean to cooking oil in a video he posted on social media on June 10, according to court documents. The video shows him applying FireClean to a metal object and pressing it against a machine designed to test the lubrication’s resistance to friction.

Fennell often makes videos to demonstrate the quality of his product, Weapon Shield, made by the Pennsylvania-based Steel Shield Technologies, by comparing it with other gun lubricants. He then bolsters his messages by sharing them on Facebook.

In the June video, he expressed his professional opinion after reviewing FireClean’s material safety data sheet and noting an expiration date printed on the bottle. “This is about the equivalent of Wesson oil. Maybe some Pam anti-stick stuff that you get in the vegetable oil category for spraying on your frying pans,” he said, one minute and 45 seconds into the video.

Looking at the document he referenced and comparing it to Crisco’s material safety data sheet, it’s unclear how the two are related since FireClean’s ingredients are not listed. Fennell did not respond to multiple requests for comment.

On June 11, he posted an image of FireClean next to a bottle of Crisco and warned, “I can see no difference in basic composition and performance.” He supported the statement by saying, “Every claim we make is backed by hard proof and evidence both in lab testing and field usage.”

Details about his test results are unclear as they were not immediately made available, but the image was presumably the first time FireClean was directly linked to Crisco.

In a Facebook post dated July 31, he called FireClean the “Pam for guns” and said that FireClean doesn’t have “anything over Crisco Oil.”

In a Facebook post dated Aug. 1, Fennell said he “spectra-analyzed” FireClean to verify his hypothesis was correct and that when he looked up the company’s patent, he found vegetable oil. “Buy a big bottle of Crisco oil and save big time,” he said.

In the abstract of a 2013 patent application for FireClean, inventors David Sugg and Edward Sugg described the lubricant as “an oil composition including at least three vegetable oils” that could be used on firearms and other items.