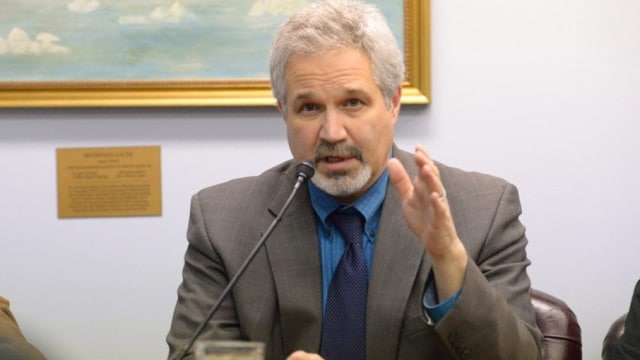 Alaska Sen. Pete Kelly, R-Fairbanks, feels that otherwise lawful gun owners should not have to leave their firearms at home if attending public colleges in the state. (Photo: Richard Mauer/Alaska Dispatch News)

Lawmakers last week affirmed that Alaskans’ constitutional right to bear arms is not surrendered when they step on the campuses of the state’s public universities.

The measure to allow students, faculty and guests to possess weapons on the University of Alaska campus in February passed the Senate Education committee and in March was endorsed by the Judiciary and Finance committees on the run up to a 13-5 vote by the entire chamber on April 7.

Sponsors argue the bill is needed in light of recent school shootings.

“The attacks at Virginia Tech, Northern Illinois University, and other past mass shootings bring a reasonable person to the unassailable conclusion that ‘gun-free zones’ have failed to afford their occupants any protection from violence and, furthermore, denied law-abiding citizens the option of providing their own constitutionally guaranteed self-defense with a firearm,” said the legislation’s author, Sen. Pete Kelly, R-Fairbanks, in a statement.

The lawmaker at one time served as the Director of State Relations for the University of Alaska.

Kelly’s legislation, SB 174, would ease restrictions on guns and knives on property controlled by the University of Alaska system. Since 1995, UA’s Board of Regents has prohibited the carrying of firearms in buildings controlled by the university and at university-sponsored events under threat of administrative sanctions. The proposal would curb that ability, which lawmakers argue violates state preemption laws.

“The policy of the University of Alaska is to say, OK, concealed carry is available to the rest of the state, but not on our campus,” said Kelly after the successful Senate vote. “And for them to do that, they do it in a manner to achieve, they have said, the safety, it’s a safety issue with them. But of course we have seen that declaring an area a gun free zone and achieving safety are not connected in any way.”

The Board of Regents, state Democrats and national gun control groups oppose the bill, arguing the cost to implement new security measures on campus to screen visitors, students and staff once concealed carry is allowed would top $1.3 million though Alaska has allowed concealed carry without a permit since 2003.

Further, they contend drugs and alcohol on state campuses could lead to a problem when mixed with firearms.

“Students in Alaska go to college to focus on their studies and excel in the next chapter of their lives – not to worry if classmates are carrying a gun in class,” said Chelan Schreifels with the Alaska chapter of Moms Demand Action. “SB 174 would create a dangerous mix. College life is already rife with academic pressure, drugs and alcohol – we shouldn’t add guns into the equation.”

The state gun rights groups and the National Rifle Association support the measure.

“A state-funded institution should not be allowed to impose rules more strict than state law, especially rules to limit one’s right to self-defense,” said the NRA’s Institute for Legislative Action in a statement. “Individuals should not be prevented from exercising their right to self-defense simply because they choose to seek a college education.”

The bill now heads to the state House where Republicans enjoy a 23-16 majority.